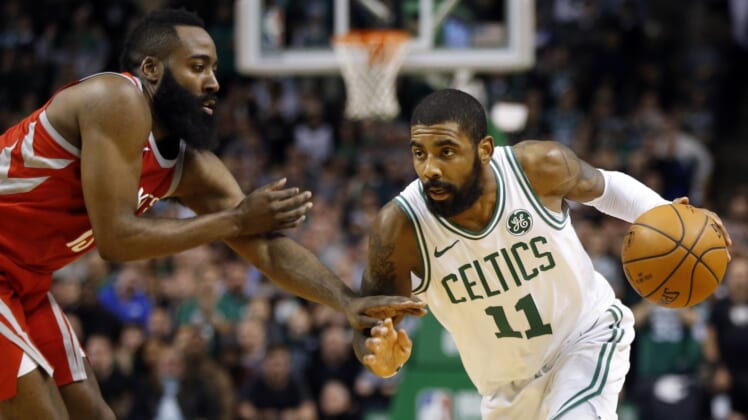 Recent NBA rumors suggest that Houston Rockets guard James Harden wants to be dealt to the Brooklyn Nets. While the three-time reigning NBA scoring champion has expanded the list of contending teams he’d be open to be traded to, Brooklyn remains at the forefront.

That’s until a report from Shams Charania of The Athletic indicating that the Rockets want either Kevin Durant or Kyrie Irving back in a potential James Harden blockbuster. While Durant remains untouchable, there’s obviously no reason why the Nets shouldn’t include Irving in a trade.

Let’s look at the obvious first. James Harden is a better basketball player than Kyrie Irving. It really isn’t even that close when you look at the statistics. Just look at how the two have performed since the start of the 2017-18 season.

The difference in win shares stands out above everything else. Sure Irving is almost three years younger than his counterpart. That’s fine and dandy. However, Harden is legitimately one of the top scorers in NBA history. That has to be taken into account here.

It was just recently that the Association fined Irving and his Nets $25,000 for refusing to meet with the media this season. Instead, Irving released a statement through his publicist indicating that he doesn’t intend to talk with the media all season. It’s just the latest example of years of drama surrounding the former No. 1 pick and NBA champion.

Irving’s relationship with former teammate LeBron James fell on hard times following the 2016-17 season, leading to the guard requesting a trade from Cleveland. In fact, LeBron added to these issues with a recent comment about his former teammate.

NBA rumors circulated that Irving was a standoffish figure during his two-year tenure with the Boston Celtics following a trade from Cleveland. These picked up after the six-time All-Star opted to sign with Brooklyn ahead of the 2019-20 season. To say that there’s no love lost between Irving and the Celtics’ organization would be an understatement.

Adding more fuel to the fire that Irving is somehow an enigmatic personality, his first season with the Brooklyn Nets was also filled with drama behind the scenes. Noting a trend here? It’s either LeBron James, the Celtics and last year’s iteration of the Nets that are the problem or Irving himself is the problem. It’s that simple.

NBA rumors: James Harden is a better fit for the Nets

On the court, Harden makes more sense opposite Kevin Durant. He can be that ball-dominant guard we saw with the Houston Rockets with KD acting the part of a true sniper.

Imagine Durant, who has indicated he’ll play small-five five, roaming around while not having to be ball-dominant. Just think of how awesome he was in that role during a brilliant tenure with Stephen Curry and the Golden State Warriors.

Related: Top 50 players in the NBA

NBA rumors: How would a Kyrie Irving for James Harden trade work

If the Nets were open to including Irving in a Harden trade, it would change up the dynamics of trade talks big time. Right now, the team is said to be willing to part with guards Spencer Dinwiddie and Caris LeVert as well as big man Jarrett Allen.

At least, one of those players would remain with the Nets in this hypothetical trade. That’s no small thing given how talented the trio is. As a combo guard, Dinwiddie would make more sense than LeVert heading to Houston.

Just some food for thought.