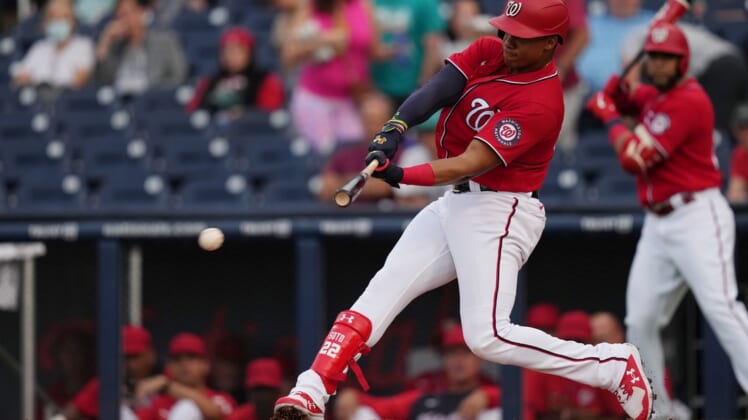 Repeating as a Cy Young Award or MVP winner is certainly a challenge. When it comes to the top rookie, it might not even be a player who opens the year on a major league roster, or it could be someone who hasn’t played pro ball in the United States.

Burnes will be among the favorites after a stellar 2021 campaign that saw him lead the NL in ERA (2.43) and strikeouts per nine innings (12.6). Philadelphia Phillies right-hander Zack Wheeler will challenge after receiving the same number of first-place votes (12) as Burnes and leading the NL in total strikeouts (247) while finishing second last season. Los Angeles Dodgers right-hander Walker Buehler (16-4) figures to win a lot of games due to his club’s powerful offense, while right-hander Max Scherzer (15-4), a three-time winner, should be in the mix for his new club, the New York Mets. San Francisco Giants right-hander Logan Webb (who won his last 10 decisions, including playoffs) and Atlanta Braves left-hander Max Fried (38-13 over past three seasons) also will be part of the race while pitching for winning teams.

San Diego Padres right-hander Yu Darvish, Dodgers left-hander Julio Urias, Brewers right-hander Brandon Woodruff and Braves right-hander Ian Anderson could pitch their way into consideration. One guy who appears out is Mets right-hander Jacob deGrom; the two-time winner likely won’t take the mound until June after a shoulder setback. Another guy not under consideration is Washington Nationals right-hander Stephen Strasburg, who has pitched just 26 2/3 innings due to injuries since being a postseason hero in 2019.

Harper will be bidding for his third MVP award after his stellar 2021 campaign (35 homers, MLB-best .615 slugging) and it is easy to forget he is still just 29 years old. Washington’s Juan Soto, 23, is also a top-flight contender (29 HRs, MLB-best .465 on-base percentage) who promises to get better and better. Austin Riley (33 HRs) is now the big thumper in the Braves’ order, but teammate Ronald Acuna Jr. (24 HRs in 82 games) also could be in the running once he comes off the injured list from last July’s ACL tear. The departed Freddie Freeman (31 HRs) may be a candidate in Los Angeles, but the Dodgers also have two other possibilities in Mookie Betts (23 HRs) and Trea Turner (MLB-best .328 average). Manny Machado (28 HRs) could be in the mix if the Padres have a strong season.

Either Paul Goldschmidt and Nolan Arenado — or both — could be under consideration if the St. Louis Cardinals are one of the top teams in the NL. Pete Alonzo and Francisco Lindor of the New York Mets fall under the same category. New Braves first baseman Matt Olson is another guy to watch. The Padres’ Fernando Tatis Jr., who finished third last season, is about two months away from playing due to a broken left wrist and won’t be part of this year’s race. San Francisco’s Brandon Crawford should be hard-pressed to follow up his superb 2021 season, when he finished fourth.

ROOKIE OF THE YEAR