Joe Gibbs Racing is set to have zero full-time drivers in the NASCAR Xfinity Series next year. Let's predict the organization's Xfinity Series lineup in 2023. 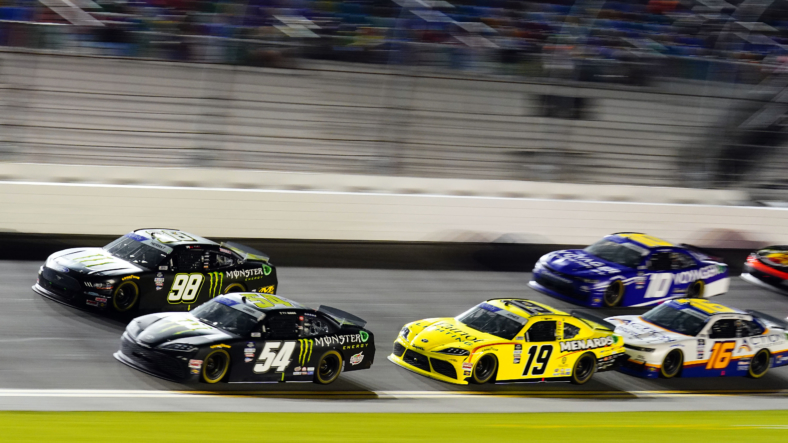 Joe Gibbs Racing is set to have zero full-time drivers in the NASCAR Xfinity Series after the shocking news of Brandon Jones replacing Noah Gragson in the No. 9 car for JR Motorsports next season.

What are the organization’s lineups going to look like come next season?

In a shocking turn of events, Jones will be heading to JR Motorsports to fill the No. 9 car, per an announcement from the organization. Jones, 25, will be in his eighth full-time season in the NASCAR Xfinity Series.

The 25-year-old has five wins to his name, all coming in the last four seasons, including a victory at Martinsville Speedway earlier this year. This jump should elevate Jones’ performance even further.

JR Motorsports is one of NASCAR’s best teams in their respective series and the No. 9 car has bred success for years. Jones could be in a position to be a championship contender every year.

Sam Mayer will return to the No. 1 car while Justin Allgaier and Josh Berry are not yet fully locked in for next year. However, it would be shocking to see either of them leave on a full-time basis.

Speaking of full-time drivers, with the announcement of Jones’ departure, Joe Gibbs Racing will have zero full-time drivers in the Xfinity Series when Ty Gibbs inevitably moves to the No. 18 car to replace Kyle Busch.

This begs the question of what Joe Gibbs Racing’s lineups will look like for the 2023 NASCAR season.

Joe Gibbs Racing’s lineups will be very intriguing for the 2023 season. Let’s start with the NASCAR Cup Series lineup which will be the most predictable one.

Denny Hamlin, Martin Truex Jr., and Christopher Bell will end up returning while Gibbs is expected to replace Busch in the No. 18 car on a full-time basis after one complete year of NASCAR Xfinity Series racing.

This leaves the Xfinity Series lineup with zero full-time drivers for the 2023 season. However, there is one driver that appears to be in a fantastic position to land one of the open rides.

Sammy Smith will end up piloting the No. 18 car for Joe Gibbs Racing on a full-time basis after his select starts this season. Smith, 18, is poised to claim his second ARCA Menards East Series championship on Thursday night.

The 18-year-old has been impressive in his starts and should develop well with a full-time schedule and likely be the top focus of the organization. It will interesting to see how he develops as a driver in replacement of Ty Gibbs. 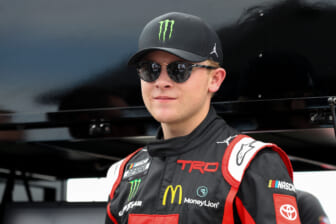 John Hunter Nemechek is predicted to drive the No. 19 car for Joe Gibbs Racing after it was announced that Kyle Busch Motorsports would be moving to Chevrolet for the 2023 season and beyond.

Nemechek, 25, is a Toyota Racing driver and will likely not move with Kyle Busch Motorsports because of this fact. It would also seem pointless to run another year in the NASCAR Truck Series.

What about Chandler Smith and Corey Heim? Smith, who is Kyle Busch Motorsports’ best driver, could move to the Xfinity Series with a top organization, such as Kaulig Racing or Joe Gibbs Racing.

It would be asinine for Toyota to let Smith walk to another organization and manufacturer so it would be smart of them to put him in a Joe Gibbs Racing entry. However, it is predicted that he moves to Kaulig Racing.

Heim will be predicted to move to Hattori Racing Enterprises as the organization receives more support from Toyota Racing. Heim is a prediction as of now and nothing has been said that suggests it’s coming soon.

However, it makes too much sense to give Hattori Racing Enterprises more support. The organization can add more trucks to the stable and give the 20-year-old a full-time ride in the series.

Joe Gibbs Racing will field the No. 54 car on a full-time basis, but it will be full of part-time drivers, such as Gibbs, Heim, and other drivers from the Toyota stable within the Truck Series.

It will be a wild silly season on the Xfinity/Truck side of the equation as Busch’s decision to join Richard Childress Racing sends a domino effect across the entire sport.