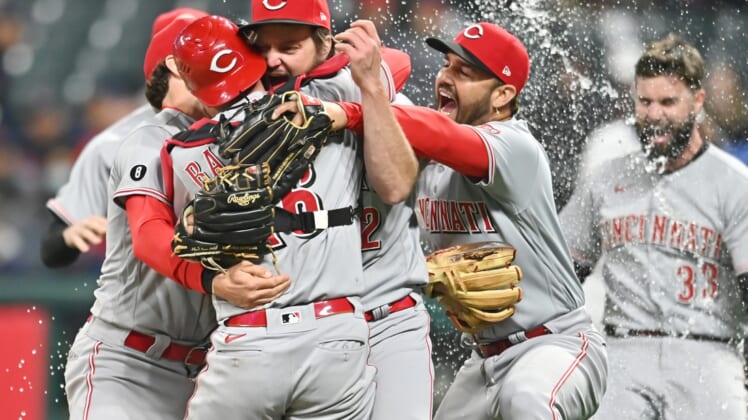 Cincinnati left-hander Wade Miley threw the fourth no-hitter of the young baseball season on Friday, leading the Reds to a 3-0 win over the host Cleveland Indians.

Miley (4-2) struck out eight and walked one. The 34-year-old veteran needed only eight pitches to navigate the ninth inning, and he tossed 114 for the game.

Miley, who entered with a 2.67 ERA but allowed all eight of his runs this season over his previous three starts, retired the first 16 batters he faced Friday, striking out six.

The perfect-game bid ended when Amed Rosario reached on a fielding error by Reds second baseman Nick Senzel in the sixth inning. Rosario went to second base when Senzel also committed a throwing error on the same play.

The Indians, who had won five straight and nine of 11, were no-hit for the second time this season. The White Sox’s Carlos Rodon tossed a no-no against them in an 8-0 decision on April 14 in Chicago. 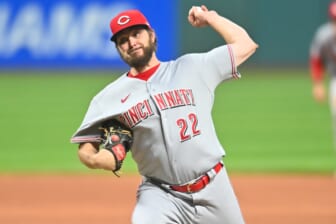 Carlos Rodon lowered his earned-run average to 0.58 with six scoreless innings as Chicago defeated host Kansas City to begin a three-game series. He did not allow a runner past second base.

Rodon (5-0) has allowed two earned runs in 31 innings this season. His ERA is the best in the American League and trails only Jacob deGrom of the Mets (0.51) in all of baseball. Zack Collins homered for the White.

Salvador Perez had four of the Royals’ eight hits. Royals starter Brad Keller (2-4) gave up three runs on five hits over six innings. He struck out six and walked just one.

Seth Brown blasted a walk-off solo homer with two outs in the ninth inning and Oakland won the opener of a three-game series against visting Tampa Bay.

Oakland left-hander Sean Manaea took a no-hitter into the eighth inning but wound up with a no-decision. Brown delivered an RBI single in the seventh before crushing a 1-1 pitch from left-hander Jeffrey Springs (2-1) deep into the right field seats for his first career walk-off homer.

Jake Diekman (2-0) recorded the final two outs in the top of the ninth for Oakland, which notched its fourth walk-off victory of the season and snapped Tampa Bay’s five-game winning streak. Mike Zunino’s single to center field tied the game for the Rays in the eighth.

Brewers starter Brent Suter (2-2) left after 2 1/3 innings due to a cramp in his right calf. The left-hander allowed four hits, one walk and three runs with two strikeouts.

Rookie left-hander Trevor Rogers (4-2) earned the win, allowing four hits, two walks and one run in five innings. He struck out six and lowered his ERA to 1.89.

Austin Slater belted an opposite-field homer to open the bottom of the seventh to break a tie and give San Francisco a win over San Diego in an early-season battle for first place in the National League West.

The home run, off right-handed Padres reliever Keone Kela (2-2), was Slater’s third of the season and gave reliever Camilo Doval (1-1) his first major league win. Left-hander Jake McGee picked up his eighth save by striking out the next three batters after issuing a lead-off walk in the ninth.

The Giants turned the wildness of Padres starter Blake Snell into a 4-0 lead, but the Padres tied the game in the top of the sixth on two-run homers by Trent Grisham and Eric Hosmer.

Flaherty (6-0), the first six-game winner this season, struck out six batters while allowing just three hits and a walk. He retired the last 13 batters he faced.

Harrison Bader hit a two-run homer for the Cardinals, and Nolan Arenado had two hits in his first game against his former team.

Odubel Herrera hit a three-run homer to highlight a six-run first inning and finished with four RBIs to lift Philadelphia over host Atlanta.

Herrera was 2-for-4 with a walk as the Phillies posted a season-high 16 hits and extend their winning streak to five games. J.T. Realmuto had three hits, including a two-run homer, and Jean Segura had four hits with two runs and two RBIs. Winning pitcher Zach Eflin worked 6 2/3 innings, allowing two runs on five hits, one walk and eight strikeouts.

Atlanta starter Charlie Morton (2-2) did not escape the first inning. He was tagged for six runs, none earned, on four hits, two walks and one strikeout in two-thirds of an inning. Dansby Swanson had two hits, including a homer, for the Braves, and Marcell Ozuna also had two of Atlanta’s five hits.

Bobby Dalbec hit a three-run homer during Boston’s four-run fourth inning to supplement a strong start from Eduardo Rodriguez in the victory over host Baltimore.

Rodriguez (5-0) allowed one run on seven hits over five innings to improve to 11-5 in his career against Baltimore. The one-time Orioles prospect walked three and struck out two.

Ryan Mountcastle (3-for-4) hit a solo home run and Trey Mancini also had an RBI for Baltimore. Orioles right-hander Matt Harvey (3-2) turned in his shortest start of the season, lasting only four innings and giving up four runs — all unearned — on four hits with a walk and three strikeouts.

David Fletcher delivered run-scoring hits during each of the Angels’ four-run innings in the win over the Los Angeles-area rival Dodgers.

Griffin Canning (3-2) allowed one run over 5 2/3 innings and combined with Patrick Sandoval on an eight-hitter as the Angels snapped a five-game losing streak and extended a lengthy tailspin for the Dodgers, who have lost four straight and are 4-14 since a 13-2 start.

Fletcher finished 3-for-5 with three RBIs while Shohei Ohtani had a pair of RBI doubles. Mike Trout had two hits, including a run-scoring triple. Dodgers starter Julio Urias (4-1) allowed five runs on eight hits and no walks while striking out four over five innings, and Mookie Betts hit a solo home run.

Joc Pederson was 3-for-4 with an RBI single and run scored for Chicago, which won its fourth straight game despite giving up two ninth-inning runs. Rex Brothers got the final out for his first save since 2013.

Davies (2-2) gave up five hits, all singles, with one walk and one strikeout.

Yan Gomes and Juan Soto hit two-run homers and Josh Bell socked a solo shot for the Nationals, and DJ LeMahieu homered twice and had three hits and Gary Sanchez also homered for the Yankees.

Francisco Lindor cracked a home run, while Michael Conforto and Jonathan Villar had RBI singles for the Mets, who have won three straight.

The Diamondbacks, who have lost four straight, scored three runs in the second when Tim Locastro was hit by a pitch with the bases loaded, and Kelly and Christian Walker drew subsequent walks off Mets starter David Peterson.

Urquidy (3-2) won his third consecutive start and allowed two or fewer runs for the fifth time in seven starts. The Astros opened their season-high, 10-game homestand by banging out 15 hits, with Gurriel finishing 4-for-4 with four RBIs.

Mitch Haniger singled home the go-ahead run in the seventh inning as Seattle rallied to defeat Texas in the opener of a three-game series in Arlington, Texas.

J.P. Crawford and Dylan Moore hit two-run homers for the Mariners. Seattle starter Chris Flexen (3-1) went 6 1/3 innings and gave up four runs on 10 hits with one walk and two strikeouts. He helped his own cause by twice picking a runner off first base.

Nate Lowe crushed a solo shot 450-plus feet to straightaway center field for the Rangers. Texas starter Mike Foltynewicz allowed four runs on six hits in 6 2/3 innings with one walk and five strikeouts.

Matt Shoemaker tossed five scoreless innings and Minnesota hit three solo homers while pulling away to for a victory at Detroit.