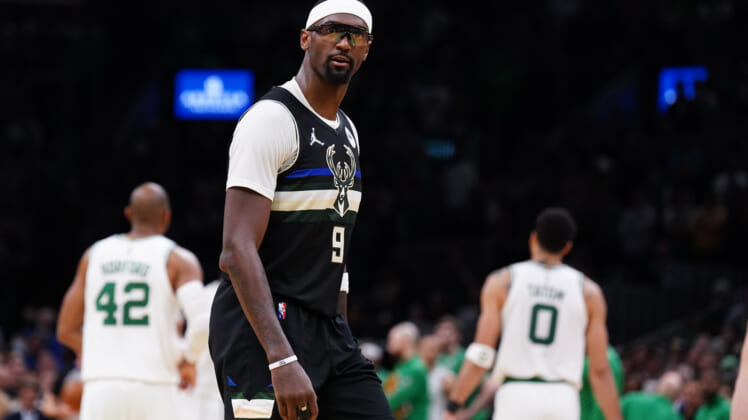 The Milwaukee Bucks exited the 2021-22 Playoffs far earlier than they expected, and have made roster moves to ensure that they are able to make a run at another NBA Championship next season. After declining his player option worth about $5 million on Thursday, Bobby Portis agreed to a four-year deal worth $49 million with the city he has called home for the past two seasons. Shams Charania of The Athletic was the first to report the deal on Twitter.

Portis has become a fan-favorite in Milwaukee, with crowds showering him with chants of “BOBBY! BOBBY! BOBBY!” whenever he takes the floor or makes a good play.

Portis first came to Milwaukee on a two-year contract ahead of the 2020-21 season. In the Bucks’ first championship season in 50 years, Portis was a key bench player, averaging 11.4 points and 7.1 rebounds per game. Perhaps most impressively, Portis 47% from beyond the three-point arc.

After winning the title, Portis declined his player option and tested free agency. The Bucks could not afford to pay him as much as other teams could offer, and Portis received some lucrative offers. However, he decided to re-sign with Milwaukee with the understanding he could opt out again after one year and get a contract that he so richly deserves.

As it turns out, that is exactly what came to pass. Portis averaged a career-high 14.6 points and 9.1 rebounds for Milwaukee last season, mostly in a starter role due to Brook Lopez’s back injury. Now, Portis will be around for the long-term trying to win more titles with Giannis Antetokounmpo.

In a development that was much less expected, at least in Milwaukee, the Bucks also signed veteran forward Joe Ingles to a one-year $6.5 million contract. Michael Scotto of HoopsHype revealed the contract details on Twitter.

Ingles has played his entire career for the Utah Jazz. He carries career averages of 8.6 points, 3.2 rebounds, and 3.8 assists per game. Most notably, at least for Milwaukee, is that he is a career 40% shooter from three. The addition of Ingles gives Antetokounmpo and Jrue Holiday one more sharpshooter to target on their kick-out passes after driving to the rim.

While Ingles may not be the biggest name on the market, he certainly is the perfect fit for the Bucks’ offensive system.