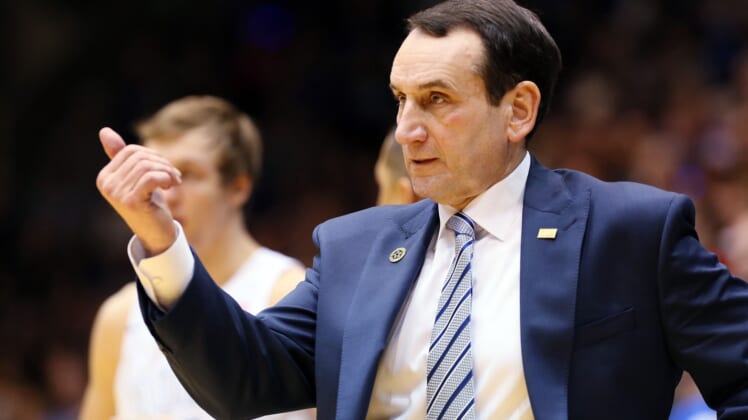 Mike Krzyzewski turned down the Lakers, Sixers and Celtics

In an interview with WIP sports radio in Philadelphia, Coach K revealed he has turned down the Los Angeles Lakers, Philadelphia 76ers and Boston Celtics over the years.

“Two times, I was pretty interested. In 1990, when Dave Gavitt took over the Boston Celtics, I did interview with them. And in 2005, with the Lakers, at the end of the day, I didn’t do it.

“Ironically, in 1990, when I didn’t do it, the next two years, we won our first two national championships. In 2005, when I didn’t accept the offer, a few months later, Jerry Colangelo offered me the opportunity to coach the national team as the first national team (permanent) coach. I was able to do that for 11 years. I got my NBA fix, so to speak. I’m really happy I got that.”

No doubt, Duke is happy he stuck around.

It’s pretty obvious that Krzyzewski isn’t going anywhere. He’s been at Duke the past four decades and is still going strong at the age of 74.

“I’ve been fortunate,” Krzyzewski said. “If you’re a successful coach or businessperson, you’re going to have opportunities. When professional opportunities occurred … I love Duke, in addition to college basketball. I love working at a university environment. You’re surrounded by great people, not just in sports. It has been proven to be pretty pure. It’s getting crazy now, but that was kind of (King) to even ask.”

Hopefully Coach K will continue to lead the Duke men’s basketball program for years to come. Before the current season was cut short due to the COVID-19 pandemic, Duke was 25-6 overall and 15-5 in the ACC.