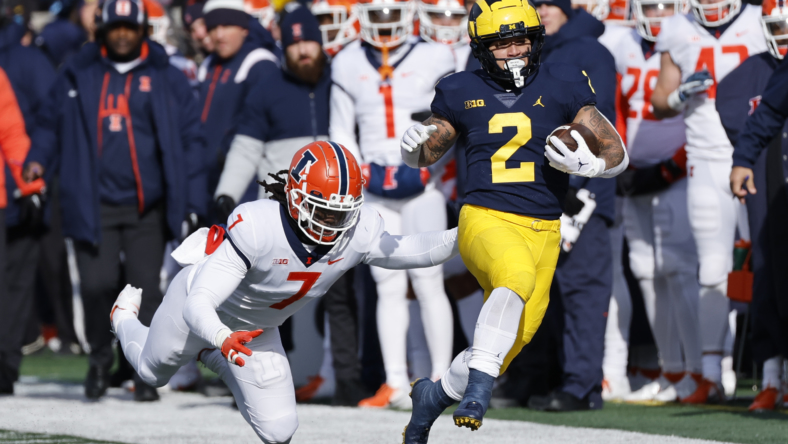 UPDATE: Blake Corum had his helmet on at the start of the second half and was going through team warmups. We may have avoided a crisis here folks.

Undefeated at 10-0, the Michigan Wolverines are off to their best start since 2006. Heisman candidate running back Blake Corum is a major reason for their astounding success this season.

On Saturday, Corum’s Heisman candidacy continued as the Wolverines hosted the Illinois Fighting Illini, a team with the third-best rush defense in the nation coming into the matchup

Yet, despite taking on a top run defense, in typical fashion, Corum was spectacular early on, rumbling for 103 yards and a touchdown on 17 first-half carries.

Unfortunately, his fun would soon come to an end.

On his 17th carry, with less than two minutes to go before the half, Corum takes a handoff from starting quarterback J.J. McCarthy and stretches to the right sideline before getting hit in the knee by what appeared to be an Illinois defender’s shoulder.

Corum quickly grabbed at his left knee but was able to walk off the field. The star running back then went back to the locker room for further medical evaluation. His status for the rest of the game is currently unknown.

Obviously, if Corum is forced to miss any amount of time, his absence would be a significant loss for this Wolverines team. Next week comes the highly anticipated battle against the Ohio State Buckeyes, and you can bet Jim Harbaugh would prefer to have Corum on the gridiron.

If Corum is forced out of action, expect sophomore Donovan Edwards and freshman C.J. Stokes to receive more work. They’ve combined for 703 yards on 112 carries thus far in 2022.

We’ll keep you updated on Corum’s status as soon as we know more.