The Miami Heat will most likely face the Milwaukee Bucks in the first round of the 2021 NBA Playoffs. Can the Heat make another run to NBA Finals in 2021?

The Miami Heat took care of business against the top-seeded Philadelphia 76ers on Thursday night, but the team cooled off quickly in a Saturday night matchup against the Milwaukee Bucks.

While the Bucks were fully healthy, Miami played without star Jimmy Butler. Milwaukee took advantage, cruising to a 122-108 victory and showing they are a better team than last season. But the loss came on a night when the Heat didn’t have their star and his running mate Bam Adebayo only scored five points.

The Heat have a clear idea of who they will see in the first round of the 2021 NBA Playoffs. A rematch from last year’s playoffs with the Bucks is on the horizon and it’s time to get down to business.

Takeaways from the Heat-Bucks previous game

Playing without Butler takes a toll on this team. Miami is 6-13 when it plays without its superstar, demonstrating the value of health during the playoffs and why one regular-season loss can’t be viewed too harshly.

Miami is a very different team when Butler isn’t off the floor and the contrast between the team’s two styles of play were evident when comparing the stats from the past two games.

Playing without Butler also influenced the level of aggressiveness we saw from the Heat. Since he didn’t play, Miami changed its approach, relying on perimeter shooting instead of driving to the hoop and it resulted in just eight free throw attempts on Saturday.

Miami also seemed to go away from Adebayo. He totaled five points, eight rebounds, and eight assists in 33 minutes of action and many wondered if the Heat went away from him by design.

Adebayo was way more passive than usual, attempting just one shot in the first quarter. He barely attacked the rim and only shot one free throw after he was fouled after Kendrick Nunn’s basket.

Speaking of Nunn, what a performance by the 25-year-old guard. Nunn had 31 points, six rebounds, and three assists in 37 minutes of action. He should be better this postseason after COVID-19 symptoms sidelined him in the bubble.

Overall, the Heat played as they should have without their superstar. Not as aggressive, sloppy, and very willing to shoot the rock from beyond the arc. That won’t be the team you see in the playoffs, so there shouldn’t be much concern. 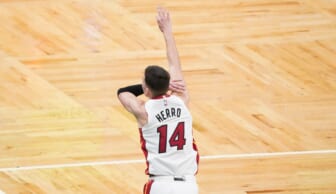 Also Read:
3 takeaways from the Miami Heat’s victory over the Philadelphia 76ers

Can the Miami Heat make another NBA Finals run?

Miami’s goal of making a second-consecutive NBA Finals run became a little bit more difficult on Saturday night. Instead of playing the Atlanta Hawks in the first round and 76ers in the second round, they now most likely face the Bucks and Brooklyn Nets.

Some have been concerned that the Heat wasted Saturday night’s game and now face a daunting path to the NBA Finals.

To be the best team in the NBA, you need to beat the best teams in the NBA. It’s impossible to avoid the Bucks and Nets throughout the whole playoffs because they are good teams.

Last season, Miami went through the Pacers, Bucks, and Celtics. This year is arguably setting up for a more difficult path, but the other team doesn’t have Jimmy Butler. The Heat have a 33-19 record with Butler this season.

Butler has only played one of the nine games against the 76ers, Nets, and Bucks this season. The Heat won that game and stomped all over the 76ers. Perhaps, this is why the Heat are not afraid of what’s ahead of them.

If the Miami Heat play as they did against the 76ers on Thursday night, they have no reason to be scared of anybody. The Heat have done the impossible before, who says they can’t do it again.