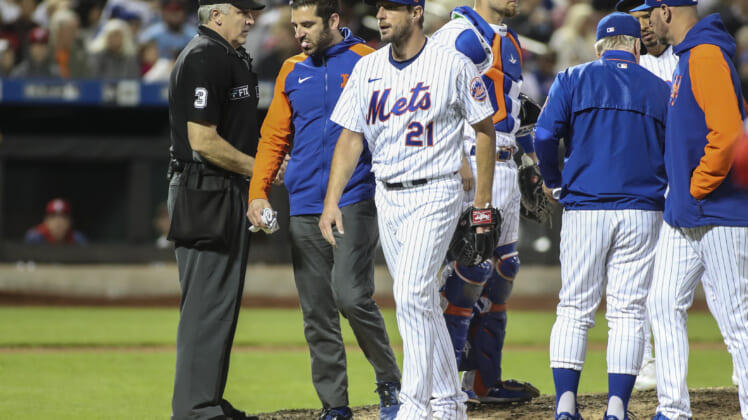 After exiting Wednesday’s starts against the St. Louis Cardinals with left side discomfort, New York Mets ace Max Scherzer is reportedly dealing with an oblique strain.

Scherzer threw his 87th pitch of the night Wednesday and immediately called for the pointer, quickly indicating discomfort in his side. New York expressed hope after the game that the highest paid player in MLB wasn’t dealing with a significant injury.

The three-time Cy Young Award winner underwent an MRI on Thursday. While specifics on the results weren’t provided, MLB insider Jon Heyman reports Scherzer is dealing with an oblique injury.

Scherzer’s injury couldn’t come at a worse time for New York. Tylor Megill, enjoying a breakout season, landed on the 15-day injured list this week after being diagnosed with right biceps tendinitis. While an MRI revealed no structural damage, he is being shut down from throwing until the inflammation goes away. There is currently no timetable for a return.

As for Jacob deGrom, he is still slowly recovering from the stress reaction in his right scapula. The organization initially hoped he might return in June. However, the best-case scenario now won’t see deGrom back in the Mets’ rotation until after the All-Star Break in July.

When will Max Scherzer return from oblique injury

Without specifics on the severity of Max Scherzer’s oblique injury, a timeline for his return to the mound varies widely. However, he will be placed on the 15-day injured list because of the issue and likely won’t throw again until June.

As noted by Dr. Jesse Morse, the left oblique for a right-handed pitcher helps the torso reset following the release of the pitch. If Scherzer is experiencing a Grade 1 strain, he’s projected to miss approximately three weeks of action.

Given the likelihood of a lengthy absence, Scherzer would also need a rehab assignment. If he is on the IL for a month, New York might opt to send him out on two rehab assignments after doctors clear him to throw and he throws multiple bullpen sessions.

A more severe oblique injury would sideline Scherzer for at least two months. ALready without deGrom and Megill, New York might soon have to explore the trade market for starting pitching. The Cincinnati Reds are reportedly shopping Tyler Mahle and Luis Castillo, but both are young starters with multiple years of contractual control and the cost would be high.