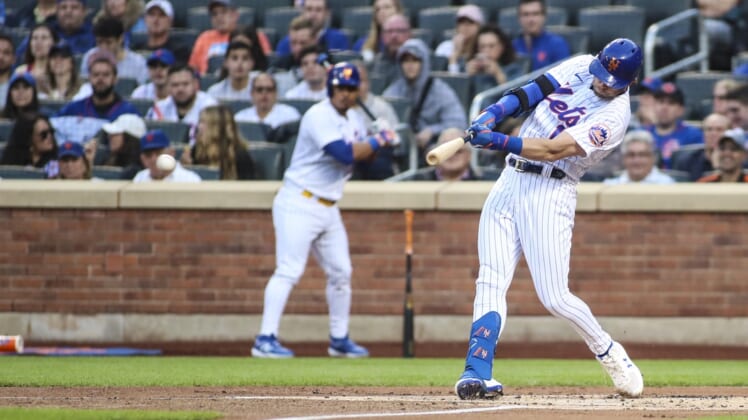 Max Scherzer earned the win but departed with left side discomfort with two outs in the sixth inning Wednesday night for the host New York Mets, who beat the St. Louis Cardinals 11-4.

Scherzer was ahead 0-1 on fellow likely Hall of Famer Albert Pujols when he sailed a slider out of the strike zone. The 37-year-old three-time Cy Young Award winner – who signed a three-year, $130 million deal in December and went 4-1 with a 2.66 ERA in his first seven starts while becoming the Mets’ no. 1 starter in the absence of Jacob deGrom – almost immediately signaled for the dugout.

SNY’s cameras captured Scherzer making a throat slashing motion and appearing to say “I’m done.” Pitching coach Jeremy Hefner, manager Buck Showalter and a trainer trotted out of the dugout and Scherzer left with the trainer after a brief consultation.

The Mets announced in the eighth inning Scherzer would undergo imaging Thursday.

Scherzer (5-1) allowed two runs (one earned) on seven hits and no walks with four strikeouts in 5 2/3 innings Wednesday. Adam Ottavino relieved Scherzer and received credit for striking out Pujols.

Scherzer was injured a half-inning after the Mets broke a 2-2 tie by scoring four times against Jake Walsh (0-1) without the benefit of an extra-base hit. Pete Alonso and Dominic Smith each had RBI singles while Eduardo Escobar lofted a sacrifice fly and Luis Guillorme laid down a safety squeeze.

Jeff McNeil opened the scoring with a two-run single in the first off Jordan Hicks. Brandon Nimmo had an RBI triple in the eighth and scored on a single by Mark Canha before Pete Alonso hit a three-run homer.

Pujols, making perhaps his final appearance in New York, had two hits, including a two-run single off the first base bag in the second. The two hits increased his career total to 3,314.

Pujols also stole a base.