Fresh life will be breathed into hockey’s most storied rivalry on Thursday when the Toronto Maple Leafs host the Montreal Canadiens in Game 1 of their first-round Stanley Cup playoff series.

Montreal has won eight of 15 all-time postseason series between the two franchises, and this year’s series marks the first Leafs-Habs playoff encounter since 1979. Through 173 regular-season games have taken place between the Maple Leafs and Canadiens since the 1979 playoffs, anticipation is high for the return of postseason stakes to the matchup.

“I’ve been a part of this rivalry for nine years now and it never gets old,” Canadiens forward Brendan Gallagher said. “The fans are so passionate, they’re so excited, it’s going to be awesome for us as players. … It’s going to be really emotional. It’s going to be intense, competitive.”

The Maple Leafs’ last playoff victory over the Canadiens came in the 1967 Stanley Cup Final, which also marked Toronto’s last NHL championship. Coming off a first-place finish in the North Division, the Leafs are hopeful of finally ending their Cup drought.

Toronto hasn’t won a postseason series since 2004, going 0-for-5 in its last five trips to the playoffs.

These Leafs defeats have often been attributed to an inability to handle the increased physicality of the postseason, and it isn’t any mystery that the Canadiens are planning to use tight defense and hard-checking play to counter the high-scoring Maple Leafs.

After going 7-2-1 over 10 regular-season games against the Habs, however, Toronto coach Sheldon Keefe said his team is “used to” Montreal’s style.

Compared to recent Leafs postseasons, Keefe said his team is “far better equipped to handle whatever way the game will be played. …We know it (the physical play) is going to a higher degree in the playoffs here, but as it will from our team as well.”

The Canadiens defeated the Pittsburgh Penguins in the best-of-five qualifying round of the expanded 2020 postseason. This success created higher expectations for the 2020-21 season, and the playoffs now provide Montreal with a fresh start after a fourth-place finish.

Injuries were a key factor in the Canadiens’ inconsistency, and many of their absent regulars are expected to play in Game 1. Gallagher (broken thumb) missed the Habs’ last 21 games, Shea Weber (upper-body injury) missed the last eight games and Phillip Danault (concussion) missed the last three games. 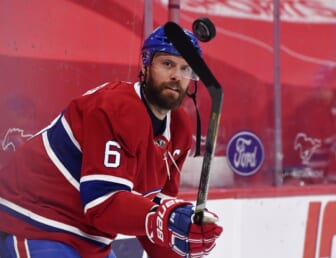 Starting goaltender Carey Price is expected to play just his third game since April 5. Price missed six games with a lower-body injury before returning for two starts and suffering a concussion, sidelining him for Montreal’s final 13 regular-season contests.

Price is a veteran of 70 career postseason games, while Toronto goalie Jack Campbell will be making his first career playoff appearance in his sixth NHL season.

Campbell was 17-3-2 with a 2.15 goals-against average and .921 save percentage this season, solidifying what had been a questionable Leafs goaltending situation.

Zach Hyman and Riley Nash are expected to return from knee injuries for Game 1. Hyman missed Toronto’s last 11 games, while Nash has yet to make his Maple Leafs debut since being acquired in an April 9 trade from the Columbus Blue Jackets.

Game 2 will be played Saturday in Toronto.