New England Patriots quarterback Mac Jones has made headlines for all the wrong reasons during the 2022 NFL season. Now, the second-year player is being accused of dirty on-field antics that once again put one of his peers in jeopardy.

During Saturday’s game against the Cincinnati Bengals, Jones attempted to make a play when linebacker Germaine Prett scooped up the football and started running down the sideline. With everyone not aware the play was blown dead, Pratt attempted to turn it into a touchdown with Patriots players trailing behind him.

That’s when Jones, realizing he couldn’t catch up to the linebacker, changed course. Instead of going after the ball carrier, New England’s quarterback went down and put his body in the direct path of Vonn Bell’s knees.

Bell, running at full speed, had no time to react and collided directly with Jones’ body and toppled over him. While the original play was ultimately ruled incomplete, Jones received criticism for a reckless move that only endangered another player.

Speaking to reporters after the game, Apple told Sean T. McGuire of NESN that he absolutely noticed the Patriots’ quarterback diving into his knees well behind the play.

“Of course, I did (notice it). He tripped me. I thought it was a dirty play. He’s done that before, I’ve seen it.”

It’s not the first time Jones has been accused of making a dirty play. During his rookie season, Jones was strip-sacked by Carolina Panthers’ edge rusher Brian Burns. As the ball rolled away, Jones grabbed Burns’ foot and twisted it on the ground.

Burns and then-teammate Haason Reddick blasted Jones for the move, labeling it as dirty and a reckless act that can have consequences. Jones’s actions actually aggravated an ankle injury that Burns had, lending credence to the criticism. 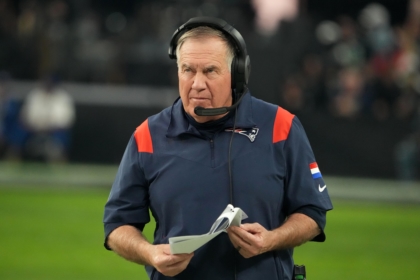 Jones has denied any malice behind his actions, but it’s evident he is developing a bad reputation among some of his peers. It could even put his own health at risk given the number of hits quarterbacks take. After such a promising tart to his career, Jones is now seemingly become more well-known for “dirty” plays than good throws.