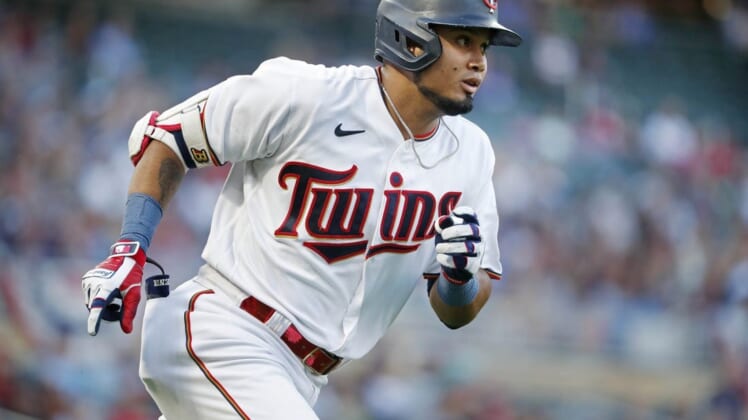 With a .335 average that is 22 points better than the closest challenger in the American League, Minnesota’s Luis Arraez seems well on his way to his first batting title.

But Arraez also showed he can hit with power in Minnesota’s 2-1 victory over the Texas Rangers on Friday in the opening contest of their four-game series in Minneapolis.

Arraez connected on the first of back-to-back homers in the first inning off Texas starter Martin Perez, and that was enough for the Twins to secure their fourth consecutive victory.

Arraez’s homer, a 363-foot drive into the bleachers in right, was his seventh of the season and also the first by a left-handed batter against Perez this season.

“Martin’s a great pitcher,” Arraez said. “I just focused on hitting the ball, and I got myself a homer.”

Rookie infielder Jose Miranda followed Arraez with a drive into the left-field bleachers.

The victory kept the Twins one game behind the first-place Cleveland Guardians in the American League Central.

The Twins improved to 51-17 when scoring first after another stellar effort from their bullpen, which blanked the Rangers over the final 3 2/3 innings. Minnesota’s bullpen hasn’t allowed a run in over 17 innings during its 4-0 homestand that began with a three-game sweep of the Kansas City Royals.

Jorge Lopez picked up his 22nd save with a scoreless ninth but got a big assist from right fielder Max Kepler. Lopez issued consecutive one-out walks to Jonah Heim and Leody Taveras. Brad Miller then hit a sinking liner to Kepler, who doubled off pinch-runner Charlie Culberson, who had sprinted halfway between second and third to end the game.

“That was an amazing throw by Kepler,” Arraez said.

Texas dropped to 2-3 under interim manager Tony Beasley and an eye-popping 7-25 in one-run games.

“Just didn’t allow himself enough time to get back,” Beasley said of Culberson’s base-running blunder. “He’s trying to make a play, trying to score. It’s unfortunate; hate to end a game that way.”

Otto snapped a nine-start winless streak that saw him lose six times with a 2-1 victory over Oakland on Monday just hours after Beasley took over for the fired Chris Woodward. He allowed one run — a solo homer to Nick Allen — on two hits over six innings but struggled badly with his control, walking six while striking out only one.

Otto has yet to face the Twins in his career.

Archer is 1-3 with a 4.64 ERA in seven career starts against Texas but hasn’t faced them since 2017 when he was a member of the Tampa Bay Rays.

Archer picked up the loss in his last start on Sunday in a 4-2 setback against the Los Angeles Angels. He allowed three runs on four hits over four innings while striking out five.