It seems the Los Angeles Lakers’ desire to acquire Kyrie Irving is so strong, that the organization may be willing to hold off on making any other “secondary” trades to make sure all avenues to land the Brooklyn Nets star this summer have been exhausted.

The Lakers are in the midst of trying to completely turn things around after a disastrous season in 2021-2022. Despite forging a superstar trio of Lebron James, Anthony Davis, and Russell Westbrook, injuries and poor chemistry led to a 33-49 finish last season for “Showtime.” They missed out on the NBA play-in tournament and fired head coach Frank Vogel just a couple of seasons after leading the team to a championship.

Now, they have a new grand strategist in former Milwaukee Bucks assistant Darvin Ham and made some savvy moves this summer to add depth and youth to the roster. However, the team has yet to ship off Westbrook — a player they still reportedly would like to move — or make a major acquisition to give Lakers fans hope next year will be better.

For months, NBA observers speculated about the deteriorating relationship between the Nets and Kyrie Irving. When the team and player couldn’t agree on a long-term deal and he was rumored to be on the trade block, it turned out that the Lakers were the only team willing to bring on the mercurial star and his hefty contract next season.

However, as the weeks have passed by that possibility has seemed less likely. That fact would suggest it may be time for the Lakers to switch from trying to trade for Irving and focus their offseason strategy on other players. 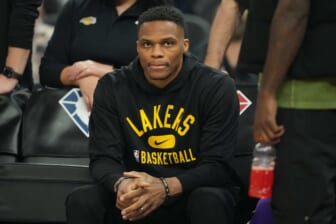 But despite rumblings of possible deals with the Indiana Pacers for Myles Turner and Buddy Hield or rumors of interest in Houston Rockets veteran Eric Gordon, NBA insider Marc Stein claims the Lakers are likely to hold off on such moves until they know acquiring Irving is an impossibility.

The Lakers have reportedly spoken with the Pacers about a deal that would include Westbrook. However, because the former league MVP has such a massive contract next season, most teams would want a future first-round pick in return to take on his salary. The same is true if they wanted to do the same to land Irving from the Nets. Meaning they would rather prioritize those picks for an Irving trade.