Los Angeles Clippers center Ivica Zubac will not play in Game 5 of the Western Conference finals against the Phoenix Suns on Monday due to a sprained right MCL.

Phoenix entered the game up 3-1 in the best-of-seven series and sported an advantage over the Clippers without Zubac to slow Suns center DeAndre Ayton.

Zubac had been listed as questionable and gives Los Angeles two starters in street clothes with knee injuries. Kawhi Leonard is also out and hasn’t played in this series. 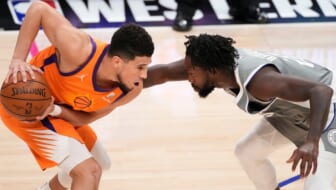 Without Zubac, the tight Clippers’ rotation gets even more limited.

A starter in the regular season (9.0 point and 7.2 rebounds per game), Zubac had a limited role in the playoffs until the conference finals. He topped 30 minutes in each of the past three games, averaging 14 points and 13.7 rebounds in those games.

Nicolas Batum and DeMarcus Cousins are the next options in the rotation for the Clippers.