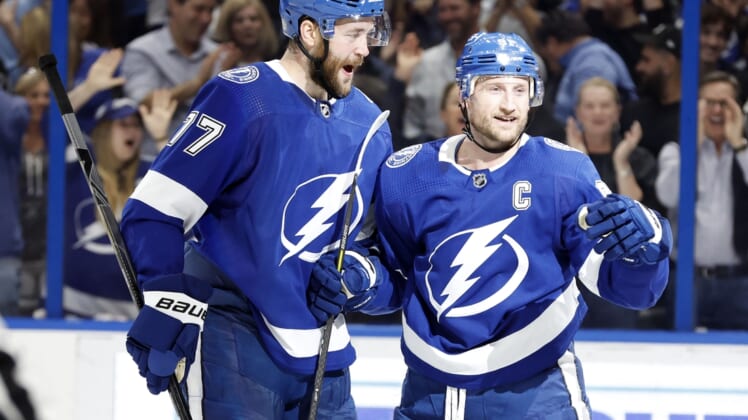 The playoff-bound Tampa Bay Lightning look to continue their dominance of the host Columbus Blue Jackets on Thursday night.

Aiming to match a season-high five-game winning streak and clinch third place in the Atlantic Division, the visiting Lightning conclude a home-and-home trying for a sixth consecutive victory over the Blue Jackets.

Victorious in six of seven and owning a 26-8 goal-advantage during its four-game winning streak, Tampa Bay (50-22-8, 108 points) is certainly playing like a club capable of winning its third consecutive Stanley Cup.

Columbus (36-37-7, 79 points) was the latest to be taken down by the surging Lightning, who won the first of this back-to-back by a 4-1 score at home on Tuesday.

Steven Stamkos reached, then surpassed, the 100-point mark for the first time during his stellar 14-year career with two goals and two assists, and Nikita Kucherov notched one goal with three assists as the Lightning prevailed in their regular-season home finale.

“This group continues to find a way,” Lightning coach Jon Cooper said. “And now, we’re at 50 wins and 100-plus points again.

“This isn’t guaranteeing playoff success. … I’m excited to see what we’re going to do. This is going to be a fun spring.”

The Lightning have had their fun of late against the Blue Jackets. Since suffering a stunning first-round sweep at the hands of underdog Columbus in 2019, Tampa Bay has won 12 of 16, including the postseason, in this all-time series. The Lightning outscored the Blue Jackets 24-11 to win the last five meetings.

“Against a team like that, you have to be careful,” Blue Jackets forward Oliver Bjorkstrand said. “They have a lot of weapons.

“(Tuesday’s) game is something we can learn from.”

Andrei Vasilevskiy recorded his 38th win after making 20 saves on Tuesday. He has a 2.50 goals-against average during his four-game winning streak versus Columbus, while backup Brian Elliott has stopped 61 of 67 shots to win his last three overall starts.

Battered by injuries, Columbus limps toward the finish finish amid a 1-4-1 rut. But, with a bevy of young players in the lineup, the Blue Jackets can take something from competing against elite clubs like the Lightning.

“It’s a good gauge for our guys to play against, and watch,” Columbus coach Brad Larsen said.

“We know we’re not a playoff team, but want to see these guys take some steps.”

Bjorkstrand appears set to finish strong with two goals and two assists in the last two games after going without a point in the previous 11. Meanwhile, teammate Jack Roslovic, who assisted on Bjorkstrand’s goal Tuesday, has 12 points (nine goals, three assists) in the last eight contests.

Columbus’ Elvis Merzlikins made 28 saves Tuesday, and has a 2.15 goals-against average in his last six starts.