The Los Angeles Lakers’ waking nightmare continued in the first half of Thursday’s Game 6 against the Phoenix Suns.

As a rather passive LeBron James did his best to put on a good face and get his teammates off to a good start, it only took about five minutes of game action until Anthony Davis went down with a reaggravated groin injury.

Phoenix’s Devin Booker dropped six 3-pointers in the first quarter as the Suns won that frame 36-14, and the Lakers trailed by as many as 29 points before the midway intermission. Even a decent stretch of play only cut LA’s halftime deficit to 21 at 62-41.

This came on the heels of a 115-85 blowout loss in Game 5 for the Purple and Gold. Los Angeles was without Davis in that contest, but it was extremely discouraging to see LeBron so disinterested — and for the rest of the Lakers to play so poorly. 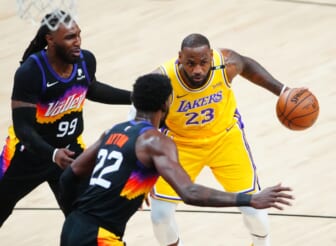 The King was definitely more engaged on Thursday, yet it was hardly enough to keep his squad competitive in the early going, to the point where it’d take a near-perfect second-half performance just to stay alive in the 2021 NBA playoffs.

So, let’s look at some of the best reactions from the Suns crushing LeBron in Los Angeles. 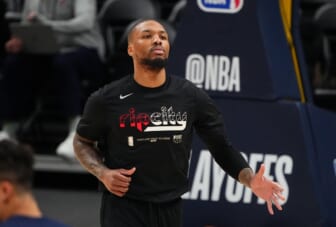