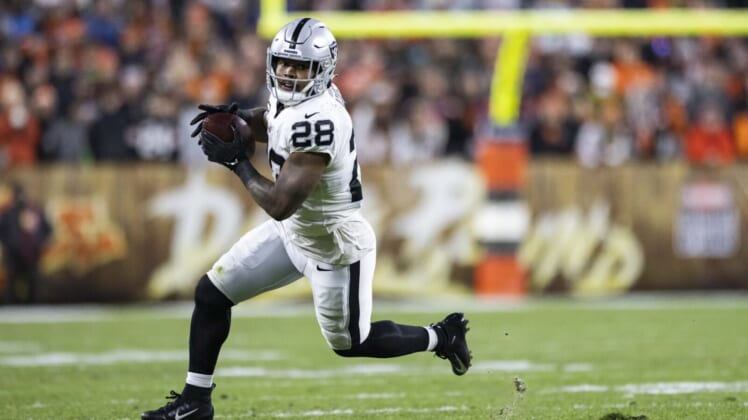 The 2021-22 NFL regular season is coming to an end in a few weeks and the Las Vegas Raiders’ future depends on these final three weeks.

Being at 7-7, the Raiders are one 12 AFC teams all within two games of each other in the playoff standings.

Once the season ends for Las Vegas, work to prepare for the 2022 begins, which will include hiring a head coach. New faces will emerge on next year’s team as we look back on this year’s Raiders.

This is the beginning of an 11-part series where we look at the players and their future with the Silver and Black.

Today, we start with the running backs.

Since Josh Jacobs’ rookie season in 2019, he has been the featured back in the Las Vegas Raiders offense. In Jacobs’ first two seasons, he reached the 240-carry and 1,000-rushing yard plateaus.

However, during his three seasons, his yardage rate per carry his dipped. The 23-year-old’s 3.7 yards per rush in 2021 ranks tied for 36th with four other rushers.

In a dozen games so far, he has 148 carries for 548 yards and seven touchdowns but does not have a 100-rushing yard game. In 12 games last season, his numbers were higher. The former first-round pick in 2019 recorded 219 carries for 831 yards and nine touchdowns in 2020. Jacobs also had two 100-yard rushing games a season ago

Although the average yards per rush are similar from last year to this year, Jacobs is seeing the ball much less in 2021.

However, one of the bright spots for Jacobs this season has been a rise in the passing game. After getting 20 receptions on 27 targets in 2019, the 5-foot-10 rusher caught 33 passes on 47 targets in 2020. So far this season, Jacobs has 47 receptions on 55 targets and on track to reach the 50-reception mark for the first time in his career.

Whether the drop in touches was due to foot and chest injuries from earlier in the year, the young offensive line or the addition of Kenyan Drake, the Raiders need to figure out how to get more volume to him for 2022.

Whether Greg Olson remains as the offensive coordinator for 2022 or not, Jacobs has the opportunity to be a bell cow running back in the future and a possible piece the Raiders could build around.

Drake came to Las Vegas Raiders this season, after making stops in Miami and Arizona, where he was the Cardinals’ primary running back last season while recording 1,092 total yards and 10 touchdowns.

Despite suffering a season-ending ankle injury a few weeks ago, Drake became a viable backup to Jacobs and helped out the run game.

Two of his three touchdowns this season came against the Broncos in Week 6 following the resignation of Jon Gruden.

Overall, Drake, who came the Raiders to benefit the offense in the passing game as a running back, recorded 30 catches across 40 targets for 291 yards and a touchdown. In the run game, Drake posted 63 carries for 254 yards through 12 games in 2021.

The 27-year-old will finish his two-year deal next season and with a full rehab to be ready in 2022, Drake and Jacobs need to see the ball. 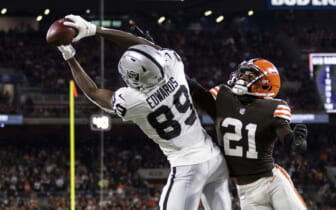 Also Read:
Raiders avoid embarrassment, win in Cleveland so why the whining?

After being released by the Washington Football Team a couple weeks before the start of the regular season, Peyton Barber was signed to the Las Vegas Raiders’ practice squad a few days later and was promoted to the 53-man roster the following day.

Since then, Barber has been the team’s No. 3 running back when Drake and Jacobs were healthy. When either were not good to go, Barber filled in as the backup running back.

In the early part of the season, Barber saw the field against Pittsburgh and Miami when Jacobs was dealing with an ankle injury.

As Drake and Barber were newcomers to this Raiders offense, they were to able to step up in Jacobs’ absence early in the season.

Barber saw his highest production come against Miami in the Raiders’ 31-28 victory, where the 27-year-old rushed the ball 23 times for 111 yards and touchdown. He also recorded three receptions on five targets for 31 yards.

Since Drake injured his ankle, Barber is filling in as the team’s backup behind Jacobs over the last three weeks. His work has started to increase over the last three games. After getting four total touches against Washington and at Kansas City combined, the 5-foot-11 rusher recorded five carries for 34 yards and one catch for 12 yards in the Raiders’ 16-14 win at Cleveland on Monday.

Ultimately in 2022, Jacobs and Drake will be in the backfield while Barber will look to play with another team. It is hard to picture all three running backs return next season.