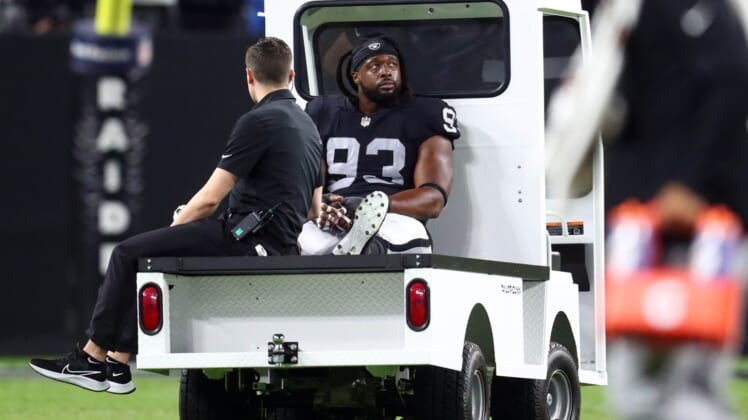 Las Vegas Raiders defensive tackle Gerald McCoy will miss the rest of the season due to a knee injury he sustained in the second half of Monday night’s win over the Baltimore Ravens, NFL Network reported Wednesday.

The Raiders signed Damion Square off the Chicago Bears practice squad on Tuesday, expecting McCoy to be out.

McCoy, a former All-Pro and a six-time Pro Bowl selection, signed a one-year, $1.25 million contract with the Raiders on Aug. 21 in an attempt to return to the NFL after a year out of the league. He sustained a quad injury in training camp in 2020 with the Dallas Cowboys.

The Tampa Bay Buccaneers selected McCoy with the No. 3 overall pick of the 2010 NFL Draft, and he spent nine seasons there. The Bucs released him in a salary-cap move in May 2019, and he signed a one-year, $8 million deal with the Carolina Panthers.

After playing all 16 games for the Panthers, he signed a three-year $18.3 million contract with Dallas but was released after the injury.

Also Wednesday, the Raiders reportedly signed guard Jordan Simmons off the practice squad of the Seattle Seahawks. The move is to bolster the offensive line after the loss of right guard Denzelle Good to an ACL injury. Simmons has played in 20 games (nine starts) for the Seahawks since 2018.