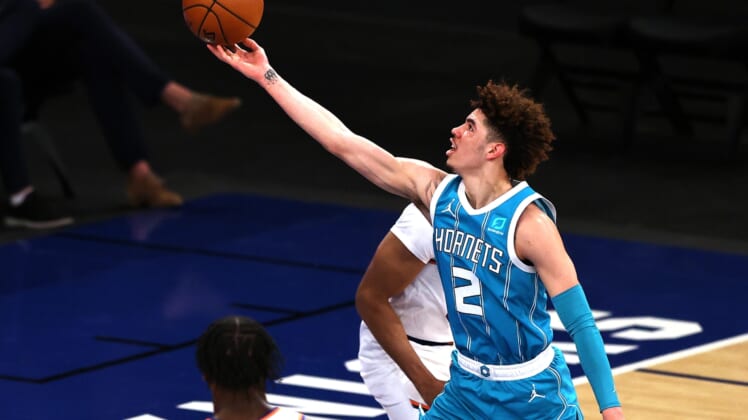 May 15, 2021; New York, New York, USA; LaMelo Ball #2 of the Charlotte Hornets heads for the net in the second quarter at Madison Square Garden on May 15, 2021 in New York City. Mandatory Credit: Elsa/Pool Photo-USA TODAY Sports

LaMelo Ball’s debut season continues garner acclaim as the Charlotte Hornets guard was named to the NBA All-Rookie First Team on Thursday after also winning the NBA Rookie of the Year Award.

Ball and Minnesota Timberwolves guard Anthony Edwards were the only players named on all 99 ballots from sportswriters and broadcasters. Those two were joined by Sacramento Kings guard Tyrese Haliburton, Detroit Pistons forward Saddiq Bey and Houston Rockets forward Jae’Sean Tate on the first team. 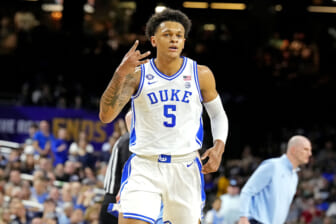 Ball, the third overall selection in last year’s draft after playing in Lithuania and Australia, averaged 15.7 points, 5.9 rebounds and 6.1 assists in 51 games for the Hornets. The Chino Hills, Calif., native saw his season interrupted for more than a month by a fractured bone in his right wrist.

Edwards, the No. 1 overall selection out of Georgia, averaged 19.3 points with 4.7 rebounds and 2.9 assists for the Timberwolves.

Ball and Tate played against each other in Australia during the 2019-20 season, with Tate spending time with the Sydney Kings and Ball playing for the Illawarra Hawks.