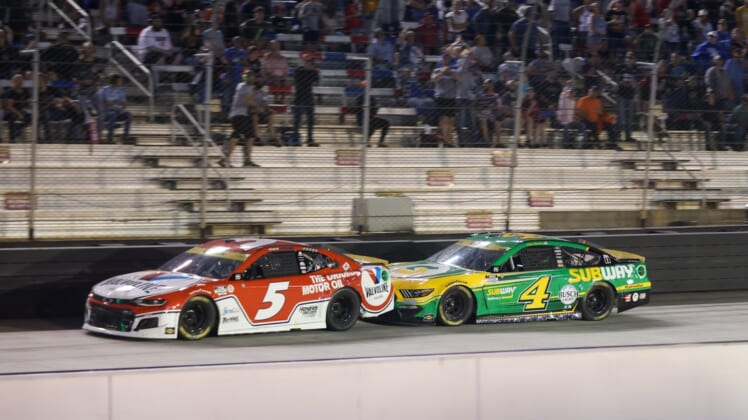 Kyle Larson added to his NASCAR Cup Series-leading win total on Saturday night when he passed Kevin Harvick for the lead with four laps to go to win the Bass Pro Shops Night Race at Bristol Motor Speedway in Tennessee.

Larson’s sixth win of the season came by fractions of a second over Harvick.

Harvick remains winless this season and finished second, .227 seconds behind Larson in the second race of the season at Bristol.

William Byron, Larson’s teammate at Hendrick Motorsports, finished third to squeeze his way into the Round of 12 of the Playoffs.

Two-time champion Kyle Busch appeared to be cruising into the next round. But with 45 laps to go, his Joe Gibbs Racing car had a tire go down. He had to pit and when he returned to the track, he was just two points above the cutline.

With 26 laps to go, Bell scraped the wall and had to pit. His seemingly comfortable position vis a vis advancing to the Round of 12 vanished as he was just 10 points above the cutline.

But the key battle for the final berth in the second round of the Playoffs saw Reddick, Byron and Almirola just a couple of points apart over the final laps.

Byron finished two points ahead of Reddick and Almirola.