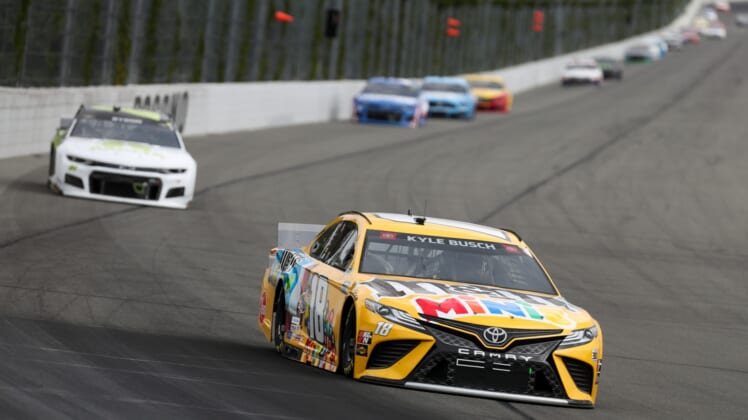 Kyle Busch took the lead with just over a lap to go and went on to win Sunday’s Explore the Pocono Mountains 350 NASCAR Cup Series race at Pocono Speedway.

He got the victory thanks to saving fuel on his final stint, leaving a slew of other drivers ahead of him over the final 10 laps heading to the pits with fuel cells all but empty.

The Joe Gibbs Racing driver also got the victory in spite of having his car stuck in fourth gear for almost the entirety of the second half of the 140-lap event.

Busch’s win was his second of the season, with his first coming at Kansas Speedway in the spring.

Kyle Larson, who lost Saturday’s race at Pocono when he blew a tire on his Hendrick Motorsports car in the final lap, finished second.

Larson’s podium came despite having to start from the rear of the field because he had to switch to his backup car after his primary was badly damaged on Saturday’s last-lap incident.

Kevin Harvick, about the only contender who wasn’t in fuel trouble late in the race, finished fourth in his Stewart-Haas Racing Ford.

Bubba Wallace was fifth, giving him his best finish of the season.

Sunday’s race was the second half of a weekend doubleheader at Pocono. Alex Bowman of Hendrick Motorsports won Saturday’s first race when Larson, looking to win his fourth straight Cup event, blew a tire on the final lap. He had a healthy lead when the tire gave out.

Busch, who led the most laps (30) and finished second on Saturday, appeared to have a car good enough to win Race 2 as he led 28 laps early. But as he headed to the pits from the lead on Lap 73, his car became stuck in fourth gear. But even though he needed his pit crew to push him to get rolling, he stayed in contention.

In addition to Larson, Ryan Newman, Corey LaJoie, Ryan Preece, Anthony Alfredo, Cole Custer and Ross Chastain each went to backup cars and started from the rear for Sunday’s race after damaging their cars on Saturday.

Justin Allgaier made his first Cup start of the season after Justin Haley crashed hard in the Xfinity Series event held earlier in the day. Allgaier took Haley’s place in the No. 77 Spire Motorsports Cup Chevrolet and finished 25th.

Next up for the series is the debut road race at Road America in Elkhart Lake, Wis.