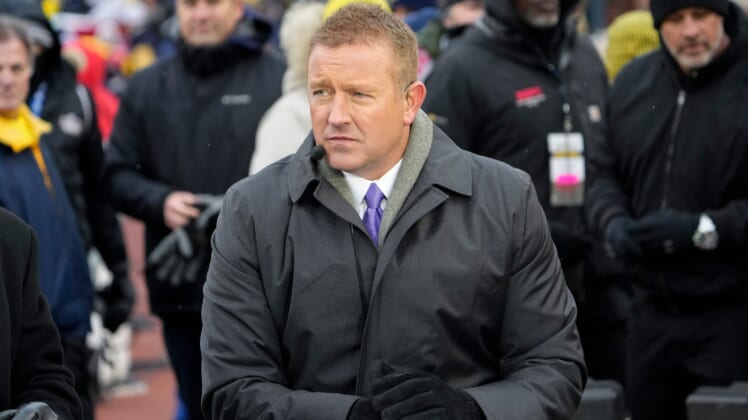 Kirk Herbstreit is one of the most iconic analysts and broadcasters in college football, commentating on big games and weighing in on important topics. Before the Rose Bowl, ESPN’s top analyst is now turning his scorn towards college football players.

Speaking about Saturday’s Rose Bowl, ESPN’s panel discussed the recent trend of some of the nation’s top players sitting out bowl games to prepare for the NFL Draft. Four Ohio State players (Garrett Wilson, Chris Olave, Nicholas Petit-Frere and Haskell Garrett) are skipping the Rose Bowl to begin their preparation for the 2022 NFL Draft.

Herbstreit and Desmond Howard, a College Football Hall of Famer, both took issue with the decisions being made by players today. But the strongest criticism came from Herbstreit, who suggests today’s student-athletes don’t love football.

“What’s the difference as a player and saying these games are ‘meaningless? Des, we played in ‘meaning games.’ I just don’t understand that if you don’t make it to the Playoff, how is it meaningless to play football and compete?Isn’t that what we do as football players, we compete? I don’t know if changing it, expanding it is going to change anything, I really don’t. I think this era of player just doesn’t love football.”

There are plenty of recent examples to choose from. Lincoln Riley left the Oklahoma Sooners weeks before the Alamo Bowl, as did former Oregon Ducks coach Mario Cristobal in that same game. But Brian Kelly presents an even better example of college coaches making personal decisions that go against the best interests of others.

Kelly, after leaving Notre Dame for LSU, left the Fighting Irish as the team still had a shot to earn a spot in the College Football Playoff. It’s a decision that the playoff committee even admitted hurt Notre Dame’s chances of earning a playoff spot.

Keep in mind, these coaches are making decisions having already earned millions of dollars. It’s a much different story for student-athletes opting out of a bowl game.

Jaylon Smith was a projected top-10 pick for the 2014 NFL Draft and opted to play in the Fiesta Bowl against Ohio State. In that matchup, he suffered a torn ACL, LCL and suffered nerve damage to his knee. He slipped into the second round and his athleticism was never the same.

It’s a worst-case scenario that also happened to former Michigan tight end Jake Butt. A projected top-50 pick in 2017, Butt played in the Orange Bowl and tore his ACL. He slipped into the fifth round and his NFL career was derailed by lower-body injuries, with his knee causing him frequent problems.

Based on recent precedent, there could be even more incentive for draft-eligible players to skip their final season entirely. Ja’Marr Chase, Penei Sewell and Micah Parsons all opted out of the 2020 season due to the COVID-19 pandemic. After dedicated a full year to draft preparation, all three were top-12 picks and have become instant NFL stars.

Coaches have set the trend and players are following it. While analysts like Kirk Herbstreit might not like the decisions being made by players, they aren’t doing it to please analysts. Football is a business, both at the collegiate and professional level. After seeing coaches make business decisions for years, players are now doing the same.