It seems that both Kevin Durant and Kyrie Irving are not blind to the fact that getting a trade out of Brooklyn will be extremely difficult, and wearing a Nets jersey in 2022 is very possible.

For the most part, the NBA offseason focus has shifted away from where the best available players on the free agent market will land to what will happen with Brooklyn Nets superstars Kevin Durant and Kyrie Irving. Durant’s trade request earlier this month completely shifted how a bunch of teams planned to approach their offseasons plans.

However, as the situation has played out, it has become abundantly clear that Durant and Irving will be difficult to move this summer, but for very different reasons. Durant is arguably the best player in the league and the bar set by the Utah Jazz and Minnesota Timberwolves trade for Rudy Gobert has made a possible deal require a historic return. While Irving is one of the most talented and enigmatic players in NBA history. Most teams would love his services but want nothing to do with his personality and salary cap bill for next season.

With various teams that were believed to be Durant contenders making offers that the Nets are not interested in, and the fact that the team reportedly would prefers both be in Brooklyn next season, a new story claims each man is coming to terms with the likelihood they won’t be competing elsewhere in 2022-2023.

On Monday night, NJ.com reported that Durant and Irving are realizing they will likely remain on Brooklyn’s roster, and that the team probably sabotaged any trade possibilities with their very high asking price. 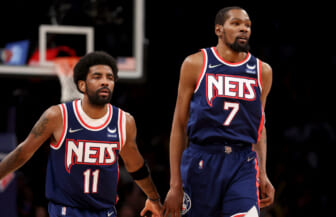 As more time passes and more organizations seem to take stances on what players they are unwilling to give up in a Durant deal — Scottie Barnes in Toronto and Mikal Bridges in Phoenix — it does seem like both will be staying. And with the Lakers seemingly the only team in the Irving market, they have few things of interest to the Nets.