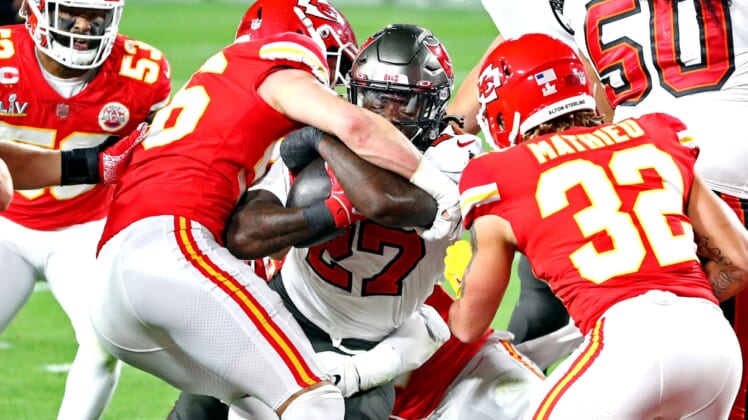 The Kansas City Chiefs were in danger of going down by two scores against the Tampa Bay Buccaneers in Super Bowl LV, but came up with a massive fourth down stop right at the goal line.

Buccaneers running back Ronald Jones got stacked up from one yard away on the team’s final down, but there were opportunities before then to find the end zone.

Joe Haeg checked in for Tampa Bay as an extra offensive lineman and leaked out behind the Chiefs’ defense, and Tom Brady put the ball right in his hands for a touchdown.

Except Kansas City linebacker Anthony Hitchens made a brilliant recovery place and punched the ball out at the catch point, as Haeg and the pigskin tumbled to the turf incomplete:

That was a couple plays before the Bucs ultimately failed to punch it in on the ground, and that lack of execution in the scoring zone could come back to haunt Tampa Bay if it fails to protect home-field advantage at Raymond James Stadium.

It was indeed a momentous, potential turning point in the battle for the Lombardi Trophy, so of course, the NFL world on social media weighed in on what the Chiefs’ defense achieved: