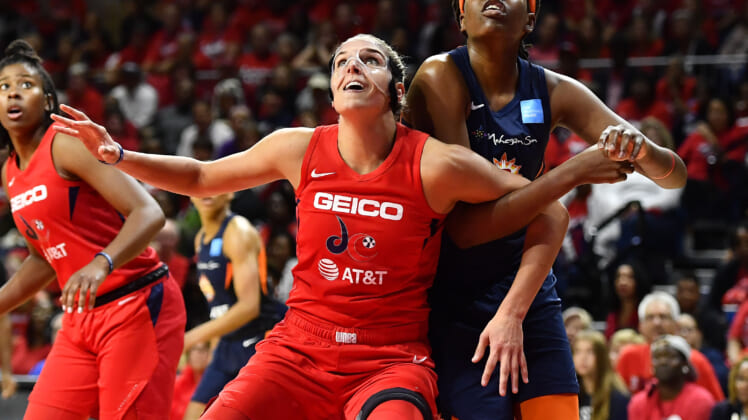 After missing the past five games, Connecticut Sun leading scorer Jonquel Jones returned to the lineup, leading her team to a 90-71 victory over the short-handed Washington Mystics. The win is the 100th in the career of Sun head coach Curt Miller, making him the 16th coach in WNBA history to reach that milestone.

After losing the first three games during their star player’s absence, the Sun began to find their footing, winning each of their last two games and extending their win streak to three with their win tonight. They now improve to 11-5 and are now just a half game back on the Las Vegas Aces for the second-best record in the WNBA.

The Washington Mystics have been ravaged with injuries all season with this game being the peak of their injury problems. They had just six active players during Tuesday night’s outing with each of their top stars out with injury.

In her return, Jonquel Jones filled the stat line with 23 points, 16 rebounds, four assists and three steals. Despite her five-game absence, Jones is tied for the most double-doubles in the WNBA this season with this being her eighth so far.

Jasmine Thomas scored 21 points for the Sun with all seven of her shots from the field coming from three-point range setting a career-high for threes in a game. Natisha Hiedeman scored 15 points off the bench while Brionna Jones recorded 14 points, nine rebounds and three assists.

The Sun took over the game in the second quarter outscoring the Mystics 27-14 connecting on five three-pointers in the period with three coming from Jasmine Thomas.

The Mystics just did not have enough bodies to compete as the Sun would pour it on in the second half leading by as many as 27 points on their way to victory.