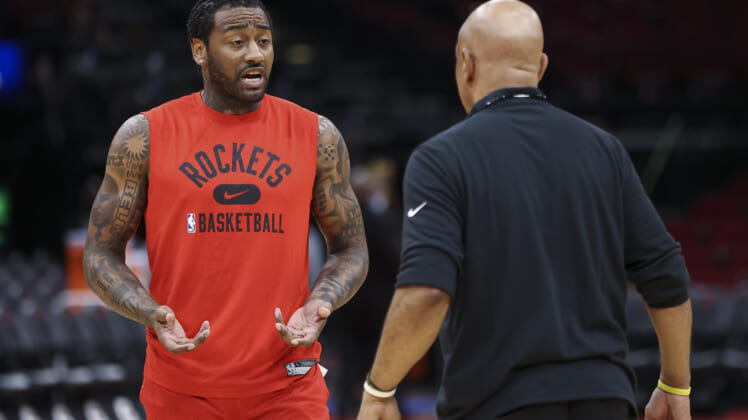 Getting a chance with a contending team in a new atmosphere, John Wall can’t wait to get started with the Los Angeles Clippers. The former Washington Wizards star has largely been forgotten about, as he’s played just 40 games since the end of the 2019 season, but the five-time All-Star couldn’t sound happier about his latest opportunity.

Speaking with Ohm Youngmisuk of ESPN during Summer League play, Wall gushed about the chance to play in an offense that also features Kawhi Leonard and Paul George, while noting he’s ok not being in a leading role anymore.

Not only is John Wall looking forward to joining his new teammates on the Clippers, he’s apparently even willing to come off the bench to do so. With Reggie Jackson having started 75 games a season ago, he’s deserving of a chance to reprise his role next season too, but it sounds as if we could get a starting point guard competition between the two.

“For me, I’m just happy to play basketball again. I’m a competitor. I know a lot of people ask me, ‘Are you mad if you start or not start?’ I don’t care. I’m a competitor, and I just want an opportunity to go out there and compete for a spot, and if I get it, I get it. And if I don’t, we know how talented Reggie Jackson is and what he’s done for this team and helping these guys out, especially when Kawhi and PG were out. Even when they were [healthy], he’s a great piece. Whoever gets the spot is great,” says Wall.

Wall signed a two-year, $13.2 million contract to join the Clippers this offseason, and he sounds excited to be joining a team that has two other All-Stars on the roster at the peak of their game.

Wall will be 32 by the time the 2022-23 season begins, but now that he’s finally healthy and in a good place, he sounds refreshed. Even if he doesn’t return to his former All-Star status, he’s at peace with just being able to return to the floor. If he personally flourishes, great, but he’s more focused on his team’s success than individual accolades at this point in his life.

Then again, he should receive better looks than he’s used to.

“You tell me the third-best defender is going to have to guard me? Good luck,” Wall said.