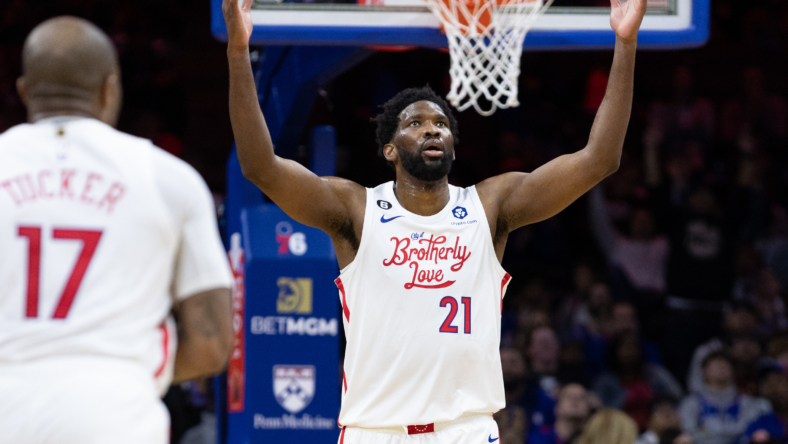 Philadelphia 76ers star center Joel Embiid has been hobbled by injury throughout the early portion of the 2022-23 NBA season.

Despite this, Embiid has decided to play through the injury issues as he attempts to help Philadelphia break out of its early-season funk.

One of the most-dominant centers in modern NBA history, Embiid did just that with an otherworldly performance against the Utah Jazz on Sunday in Philly.

Embiid scored a whopping 59 points on 19-of-28 shooting. He added 11 rebounds, eight assists and seven blocks in one of the greatest performances we’ve ever seen on an NBA court.

Embiid is now the first player in NBA history to drop 50-plus points with double-digit rebounds as well as five-plus assists and five-plus blocks. Simply sensational stuff.

Joel Embiid on historic run for the Philadelphia 76ers

It was just Saturday night that Embiid scored 42 points in a win over the Atlanta Hawks. He’s now dropped 101 points in the past 24 hours. It’s been needed for Philadelphia with James Harden currently sidelined to injury.

Speaking of injuries, Embiid opened up what he’s dealing with following Saturday’s win over Atlanta.

“I plan on playing but I’m going to see how it reacts tomorrow. It’s pretty sore. “I don’t know what happened but some days I can’t lift my arm up. When I block shots, I really feel it. I don’t what’s going on.”

It looks like Embiid’s shoulder was just fine as he just put up one of the finest performances we’ve ever seen on a basketball court. Simply amazing.