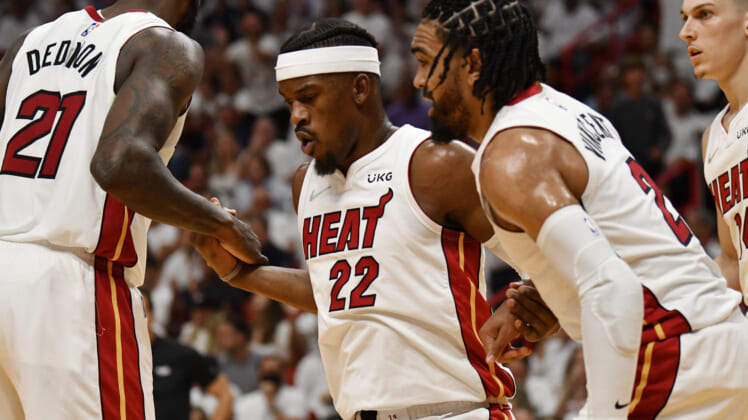 The Miami Heat got off to a scorching start, getting out to a 26-point lead over the Boston Celtics during the first half of their Game 3 matchup in the Eastern Conference Finals. As usual, Jimmy Butler played a big role in their success, chipping in eight points, while also coming away with two steals.

With the Heat coming out of the half up by 15 in a series that’s tied with one win apiece, Butler won’t be joining them for the final 24 minutes of the game.

As the ABC broadcast mentioned, Butler is experiencing right knee inflammation and will not return to the game.

There was no previous visual indication that Butler was fighting through any sort of uncommon pain, and his workload from the first half didn’t suggest anything pointing to injury either.

Butler finishes Game 3 with a +13 from the floor, after leading the Heat with 20 minutes in the first half.

Butler led the way with 41 points in Miami’s Game 1 victory and followed up that effort with another team-leading performance with 29 points in their Game 2 loss. Clearly, his absence will be felt the rest of the way.

Now the Heat will try and hold off the Celtics in Game 3 without their best player.

The Celtics already had the momentum heading into the half on a 10-0 run to narrow the lead. We’ll see if they can keep up the momentum in the third quarter.

Hopefully Butler’s knee inflammation doesn’t act up too much and the six-time NBA All-Star can return Monday night for Game 4, which will once again be at the TD Garden in Boston.