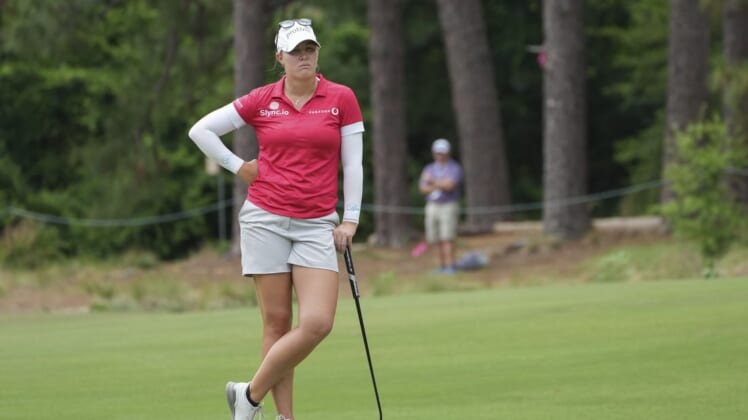 Jennifer Kupcho drained a late eagle putt Thursday on her way to a 9-under-par 63 that handed her the first-round lead at the Meijer LPGA Classic in Belmont, Mich.

Kupcho’s lengthy eagle putt came at the par-5 14th hole at Blythefield Country Club and boosted her to 9 under, where she remained the rest of the afternoon through a bogey-free round. She led Gerina Mendoza (64) by one stroke.

Lexi Thompson and Swedes Madelene Sagstrom and Anna Nordqvist were tied for third after shooting rounds of 7-under 65.

Kupcho, who earned her first LPGA win earlier this year at the ANA Inspiration, a major, made six of her seven birdies on the front nine for a 6-under 30. She birdied the par-3 13th just before her eagle, an uphill putt that broke right to left.

Mendoza leapt three shots up the leaderboard on her final two holes, sinking a birdie at the par-4 17th before eagling the par-5 18th.

Mendoza is still seeking her first career win on the LPGA Tour.

“What I’ve learned over my career is no two days are the same, so tomorrow is going to be a new day,” Mendoza said. “I’m probably going to wake up with new feels, so just kind of take the day as it comes and whatever it hands me, just do the best I can at that one shot.”

Thompson, meanwhile, is still hunting for her first LPGA victory since June of 2019. Starting her round on the back nine, she carded seven birdies without making a bogey.

“I just kind of felt really relaxed the whole day,” Thompson said. “Coming into today I knew I’ve been hitting it well and I’ve been putting in the work, so just coming out here and believing in myself and just staying in the moment, in the present. Had a little bit of a birdie streak. There are some reachable par-5s out there, so definitely have to take advantage of it.”

Andrea Lee shot a 6-under 66 to hold sixth place. Eight players were tied for seventh at 5 under, including world No. 2 and tournament defending champion Nelly Korda, who made seven birdies and two bogeys.