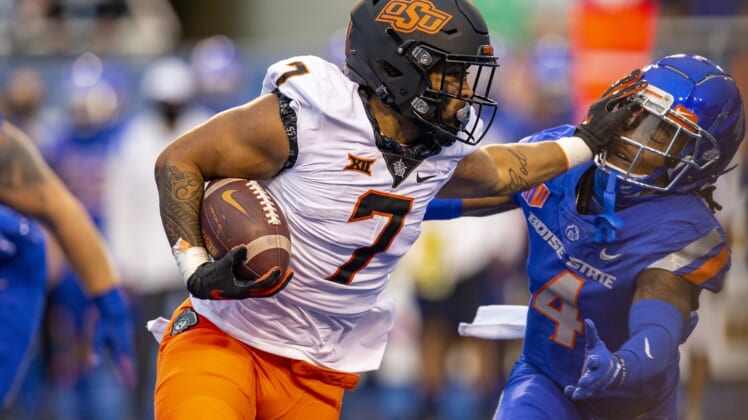 Jaylen Warren rushed for a career-high 218 yards and scored two touchdowns to lead Oklahoma State to a 21-20 victory over Boise State in a nonconference game Saturday night at Boise, Idaho.

Spencer Sanders added a rushing score for the Cowboys (3-0). Malcolm Rodriguez forced a key fumble to set up Oklahoma State’s go-ahead touchdown late in the first half. 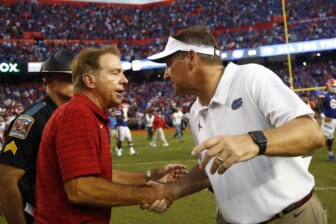 Sanders completed 6 of 13 passes for 87 yards and rushed for 40 yards on 14 carries as the Cowboys won for the 19th time in their last 20 nonconference games.

Hank Bachmeier was 22-of-34 passing for 242 yards, one touchdown and one interception for Boise State (1-2). Cyrus Habibi-Likio rushed for a touchdown and Davis Koetter had a scoring reception.

Warren lost a fumble at the Oklahoma State 41-yard line and Boise State’s JL Skinner recovered with 3:22 left. The officiating crew blew the play dead while Skinner was running toward the end zone and asserted Warren was down before he fumbled but a replay review showed that his knees weren’t down when he lost the ball.

But the Cowboys drove 60 yards on 10 plays with Warren scoring from 6 yards out with 2:10 left in the first half. Rodriguez then forced Boise State’s George Holani to fumble and Oklahoma State’s Devin Harper recovered at the Broncos’ 21-yard line with 1:58 remaining.

Five plays later, Sanders scored on a 1-yard keeper with six seconds left as the Cowboys led 21-20 at halftime.

At the outset, Dalmas booted a 40-yard field goal and Bachmeier tossed a 27-yard scoring pass to Koetter for a 10-0 Boise State lead with 5:10 left in the first quarter.

Warren exploded for a 75-yard touchdown run on Oklahoma State’s next play from scrimmage. Warren rushed for 150 yards in the first half.