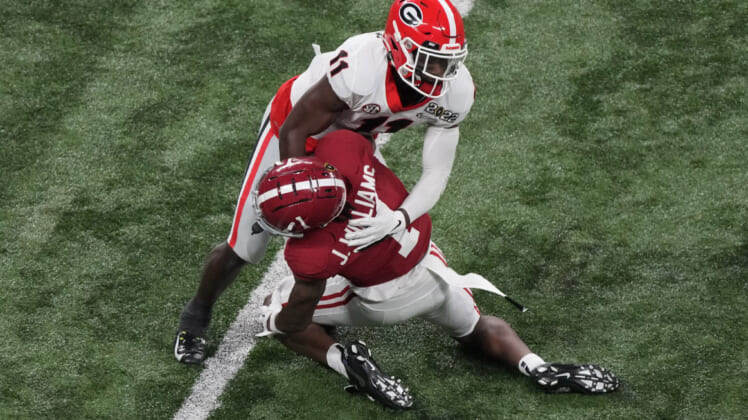 Update: Alabama ruled Jameson Williams out for the remainder of the game with a knee injury.

In his first season with Alabama after transferring from Ohio State, Jameson Williams has put up an absolutely tremendous performance.

In fact, Williams is being considered a likely top-20 pick in the 2022 NFL Draft after tallying 75 receptions for 1,507 yards and 15 touchdowns in 14 games heading into Monday night’s national title matchup against Georgia.

Unfortunately, the 6-foot-2 pass catcher left in the second quarter after catching a 40-yard pass from Heisman winner Bryce Young.

As you will see below, something seemed to be off when it comes to Jameson Williams’ left knee. Those on the scene in Indianapolis concluded it was a knee injury. Either way, it just didn’t look good.

That’s certainly an awkward landing on the turf in Indianapolis.

Williams was ultimately helped off the field without putting any weight on his left leg. The fact that he immediately clutched for his knee can’t be seen as a good thing.

The good news? Jameson Williams was able to leave the sideline and head to the locker room under his own power.

We’ll have updates as soon as they become available.