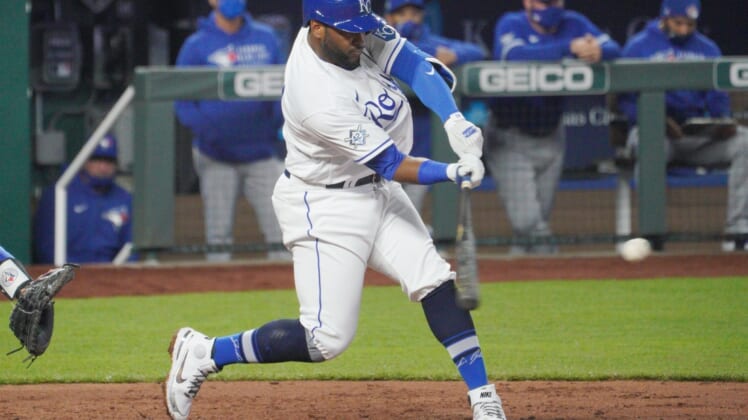 Jakob Junis threw five solid innings for the second straight start as the Royals hung on to defeat the Toronto Blue Jays 7-5 Thursday night in Kansas City. Junis has allowed two runs in 12 innings this season.

The Royals, who ended a six-game streak with one or zero extra-base hits Wednesday, had four doubles and a triple. Toronto’s Bo Bichette saw his 11-game hitting streak snapped.

Junis (1-0) was not part of the Royals rotation at the start of the year, but he might be now. He threw five scoreless in his first start April 7 when he was expected to go only two or three innings. Thursday night he allowed two runs on five hits. He walked one and struck out six.

Scott Barlow earned his first save.

Anthony Kay (0-1) made his season debut for the Blue Jays. He allowed five runs (four earned) on six hits in 3 1/3 innings. It was his first career loss.

The Royals got to Kay in the first. Whit Merrifield led off with a single and he scored on Andrew Benintendi’s opposite-field double.

The Royals got another run in the third on an opposite-field extra base hit. Hanser Alberto beat out an infield hit, and Nicky Lopez followed with a triple to left that eluded left fielder Lourdes Gurriel Jr. Merrifield then hit a scorching ground ball that was ruled an error on third baseman Cavan Biggio, and Lopez scored.

The Royals broke open the game with four runs in the fourth. Jorge Soler led off with a double. With one out, Hunter Dozier and Alberto lined back-to-back RBI doubles chasing Kay. Reliever Tanner Roark walked Lopez and Merrifield hit another line drive off Biggio’s glove, scoring two more.

Joe Panik’s two-run double in the sixth came off reliever Jake Newberry, but the runs were charged to Junis. Newberry walked Gurriel and then gave up an RBI single to Rowdy Tellez. Josh Palacios drove in the fourth run of the inning with a sacrifice fly.