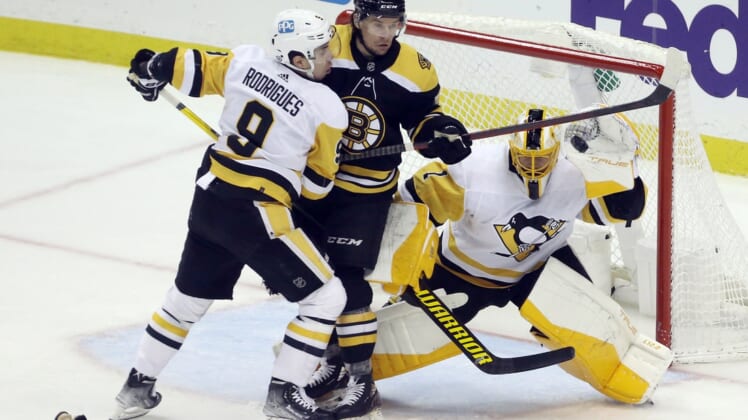 Jake Guentzel had a hat trick to reach 40 goals and goaltender Casey DeSmith stopped all 52 shots he faced Thursday to lead the Pittsburgh Penguins to a 4-0 win over the visiting Boston Bruins.

It was DeSmith’s ninth career shutout, his third of the season and his first against Boston.

The game was an equalizer after the Bruins beat the Penguins 2-1 Saturday in Boston.

It also helped Pittsburgh (44-23-11, 99 points) in its quest to avoid falling into a wild-card spot in the Eastern Conference, while it was a blow to the Bruins (47-25-5, 99 points) in their attempt to climb up from a wild-card position.

Jason Zucker also scored for the Penguins, who had lost nine of 13 (4-7-2) entering the night.

DeSmith, filling in while No. 1 goalie Tristan Jarry deals with what is believed to be a broken right foot, set a career high in saves. According to the Penguins, his save total was a franchise record for a shutout.

The Bruins had their two-game winning streak snapped.

Guentzel opened the scoring at 7:49 of the first. Off a pass from Sidney Crosby, had used a backhand-to-forehand move to get around defending forward Charlie Coyle and shot the puck between Swayman’s pads to make it 1-0.

Boston came out with a flourish in the second and built an 10-0 shot advantage, but the next shot belonged to Pittsburgh, and it was a goal.

Off a touch pass at center ice from Jeff Carter, Zucker got a short breakaway and flipped the puck over Swayman’s glove for a 2-0 Penguins lead at 6:10.

Guentzel completed his fifth career hat trick with an empty-netter with 2:05 left in regulation. It gave him 40 goals for the second time in his career.