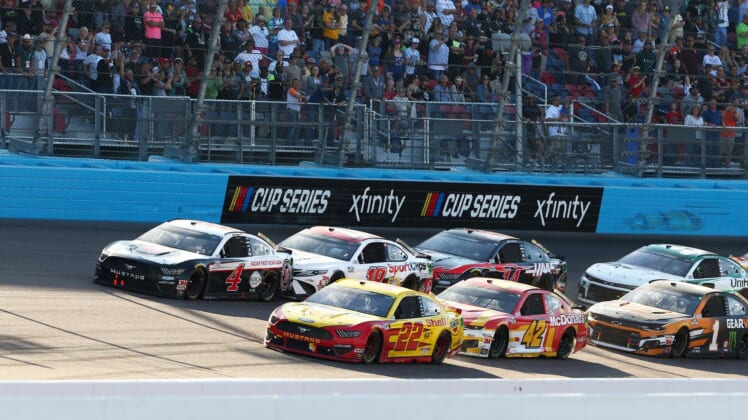 Last Sunday, NASCAR debuted its eNASCAR iRacing Pro invitational Series. Fans watching the event on FS1 immediately loved it. And apparently so did the network, as the TV ratings clearly show.

Fox Sports shared that the inaugural eNASCAR event, which was won by three-time Daytona 500 winner Denny Hamlin, “drew 903,000 viewers on FS1, according to Nielsen Media Research.”

Here’s more on this groundbreaking development, from the network’s press release:

“FOX SPORTS iRACING was the most-watched telecast on FS1 since the pandemic-induced sports shutdown began on March 12 and Sunday’s most-watched sports telecast on cable television, as well as ranks as the highest-rated esports TV program in history.

“Additionally, according to rankings by Twitter interactions, the eNASCAR iRacing Pro Invitational Series on FS1 was the #1 most-social TV program overall on Sunday. NASCAR-owned content related to the event also produced more than one million engagements throughout the weekend.”

Folks, that’s a ton of eyeballs and social media engagement for an event that didn’t even feature real live sports. Even better, NASCAR drivers really did their part to drive some of that engagement on social media.

Even though the racing wasn’t “real,” NASCAR and its stars made it fun, and that’s what everyone needs during this health crisis. Jeff Gordon highlighted this very fact.

“The response on social media to last Sunday’s race has been incredible,” Gordon said. “We were able to broadcast a virtual race that was exciting and entertaining. It brought a little bit of ‘normalcy’ back to the weekend, and I can’t wait to call the action Sunday at Texas.”

No doubt, fans are excited about the next race, too.

Wave of the future?

We could see more sports embrace this type of engagement amid the coronavirus pandemic. Fans need an outlet, and given the technology at our fingertips in this day and age, it’s possible to give that to them while still keeping everyone as safe as possible.

Other sports have started doing a little bit of this. The Washington Wizards of the NBA, along with the Washington Capitals of NHL, have been simulating games and broadcasting them live on NBC Sports Washington.

There’s no telling how long NASCAR and other pro sports are going to be shut down. The COVID-19 pandemic has only just begun to hit the United States, and already hospitals in major cities are experiencing significant stress due to the amount of people who need medical attention.

For so many, sports are a primary outlet, even in the best of times. In previous times of crisis in America, often it was sports themselves that helped Americans get back to that sense of normalcy. We recently delved into some of that after the NBA’s suspended season led to an avalanche of sports closures around the nation.

Now, not only are we all being told to stay at home — for very obvious and important reasons — but there aren’t any sports to enjoy.

The arrival of eNASCAR and other eSports changes all of that.

Now, fans can still enjoy the sport they love, and nobody’s putting themselves in harm’s way.

It’s a beautiful thing, and it’s not hard to imagine other pro sports will try to do something similar to what NASCAR did, especially if the COVID-19 pandemic keeps us all inside our homes for the next two or three months.