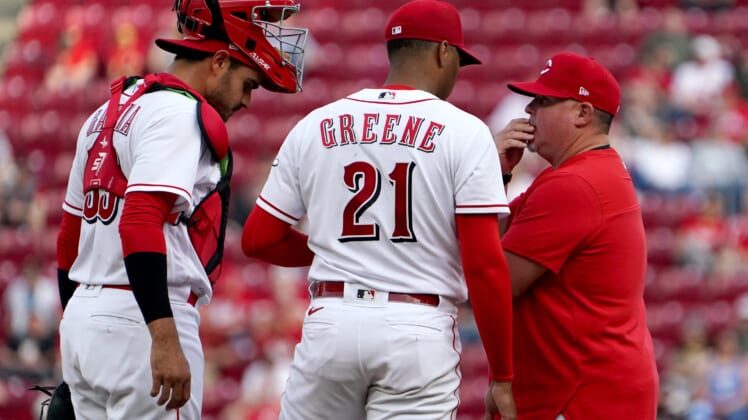 One of the more interesting stories throughout the baseball world on Friday night was the disappearance of the otherworldly velocity Cincinnati Reds fireballer Hunter Greene displayed in his first two major league starts.

The last time Greene took the mound he topped 100 mph on a regular basis, he even set an MLB record for the most times over the century mark in a single start, providing Reds fans hope for a bright future.

That wasn’t the case during his third start against the St. Louis Cardinals, when he averaged just 96 mph on his fastball. Normally just 96 would sound ridiculous, but we’re talking about a player who averaged 100.2 mph in his last outing. Needless to say, tonights showing was a tick slower.

Greene didn’t top 97.2 with his fastball, in addition to having some control issues, which is a bit more common when throwing the heat.

That doesn’t mean his slightly slower fastball can’t still be effective, but it begs the question — is Greene dealing with an injury? He only threw 66 pitches, going 3.1 innings with four hits allowed with three earned runs and four walks with three strikeouts. Did the Reds pull him due to ineffectiveness, likely a lack of control, or because they also felt or knew he was battling some other medical issues?

Hopefully the No. 26 overall prospect on the MLB.com top-100 list is A-OK, but this recent showing wasn’t what we’ve come to expect from one of the hardest throwers in baseball.

Greene takes on the San Diego Padres on April 28. We’ll be keeping a close watch to see if his record-breaking heater returns to top form.