First-year general manager Nick Caserio and the Houston Texans are listening to trade offers for quarterback Deshaun Watson, according to multiple reports.

The shift comes after Watson reported to training camp on Sunday. Caserio and head coach David Culley said during the offseason, even after sexual assault and misconduct allegations arose against Watson, that the Texans had “no interest” in trading the franchise quarterback.

Watson signed a four-year, $156 million contract extension last year but frustration from a losing season, the trade of wide receiver DeAndre Hopkins and not being involved in discussions surrounding the team’s decisions on a new head coach sparked Watson’s request. 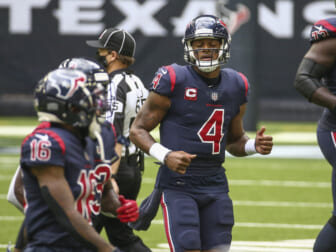 Watson’s personal quarterback coach, Quincy Avery, told ESPN he expected Watson to be traded not long after reporting to camp.

However, the Texans have not yet received any trade offers they consider “serious,” according to ESPN.

How the Texans move forward at quarterback and if they allow Watson to take part in those practices while on the trade block is unclear.