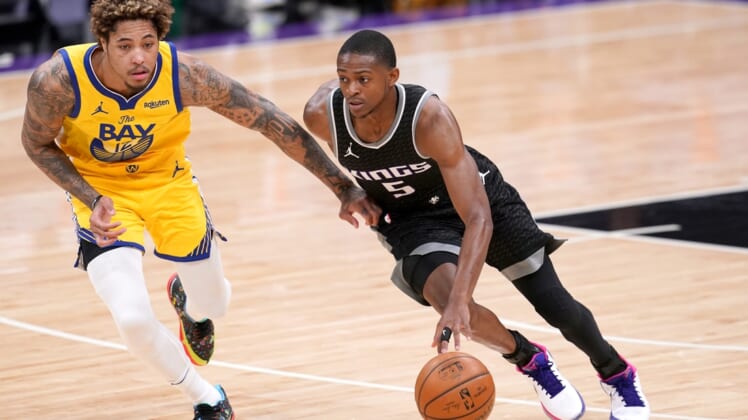 The San Antonio Spurs and Sacramento Kings, two teams going in opposite directions in the Western Conference standings, will square off on Wednesday in the back end of the two-game mini-series in the Alamo City.

The Kings, winners of a season-high five straight games, rolled to a 132-115 victory over San Antonio on Monday in series opener. Sacramento led by just three points early in the fourth quarter before it ripped off a 12-2 run to build its advantage to 13 points and never let the Spurs closer than 10 points down the stretch.

D’Aaron Fox scored 24 points, and Richaun Holmes added 23 points and 12 rebounds for his 19th double-double of the season for Sacramento.

The Kings looked nothing like a playoff-caliber team in February when they lost nine straight games. But things have turned around, as Sacramento has added some defense and determination to an attack that’s one of the highest scoring in the league.

“The goal for this team is to make the playoffs,” Holmes said after Monday’s win. “We want to keep this thing rolling. There’s a sense of urgency, guys understanding the moment, understanding we have a chance to do something and not take the moment for granted.”

Buddy Hield added 20 points for the Kings, with Tyrese Haliburton scoring 15 points and dishing out 10 assists, Harrison Barnes and Terence Davis hitting for 14 points each and Maurice Harkless tallying 13 for Sacramento.

“We’re all here to help change the Kings’ culture,” said Haliburton, who had his second double-double. “Get the Kings back to the playoffs, do special things here in Sacramento, things they haven’t done in a long time.”

The Spurs have lost five of their past six games and are 1-4 over the first five contests of a franchise-high nine-game homestand. Suddenly San Antonio, which was one of the league’s surprise teams in the first half of the season, is scrambling to put together consecutive well-played games.

Part of the Spurs’ woes has been on the defensive end, as the loss Monday came after San Antonio allowed more than 130 points for the second time on this homestand. Sacramento shot 56 percent from the floor on Monday and was 18-for-36 from beyond the arc.

“If (an opponent) shoots 50 percent in the NBA, you’re probably in a little bit of trouble, so you can’t exacerbate that situation by giving up 23 points on turnovers, 20 points in transition,” Spurs coach Gregg Popovich said. “On Wednesday, our transition defense has to be better, and we have got to handle the ball better.”

Dejounte Murray led the Spurs with 23 points (21 of those in the first half) while Derrick White scored 19, Jakob Poeltl and DeMar DeRozan racked up 17 points apiece, and Rudy Gay contributed 10. Poeltl also grabbed 11 rebounds for San Antonio.

San Antonio does not have two nights off in a row for the rest of the regular season, so there is no rest for the weary.

“It’s not easy, but it’s not going to change anytime soon,” White said after Monday loss. “We’ve just got to find a way to keep getting our body and mind ready to play each and every day.”