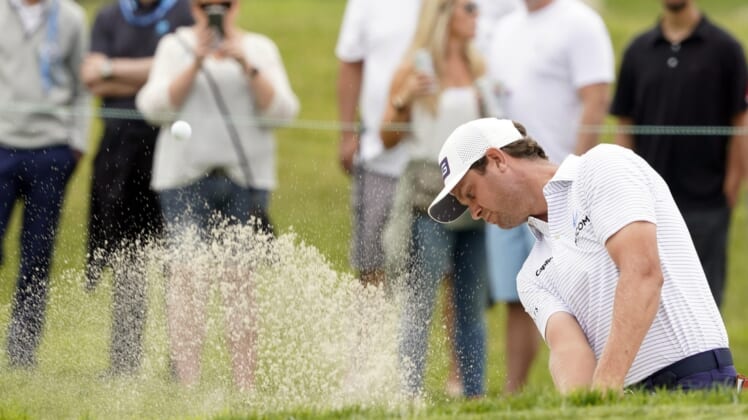 Harris English is a multiple-time winner in a PGA Tour season for the second time, and the 31-year-old might be able to call himself a Ryder Cup participant later this summer.

English rose five spots to No. 8 in the United States Ryder Cup rankings on Monday, a day after outlasting Kramer Hickok in an eight-hole playoff to win the Travelers Championship. Having also won the Tournament of Champions to kick off 2021, English rose to a career-high 12th in the Official World Golf Ranking on Monday.

It continues a remarkable comeback for English, whose previous two PGA Tour victories had both come eight years ago. He fell as low as 369th in the world rankings as of September 2019 and was briefly playing on the Korn Ferry Tour before resurrecting his game.

English steadily climbed his way back up the world rankings with four top-10s in a five-event stretch to begin the 2019-20 season and really announced his return with a solo second to Dustin Johnson at last year’s Northern Trust. He reached the Tour Championship, which earned him a spot in the Tournament of Champions courtesy of the PGA Tour’s expanded field due to the COVID-19 shortened calendar last year.

English took advantage with the win in Hawaii, and after scuffling a bit over the spring, he finished third at the U.S. Open before winning the Travelers.

The former University of Georgia star is now knocking on the door of his first Ryder Cup team.

Occupants of the first six spots after the BMW Championship in August will earn automatic spots on the team that will take on Team Europe at Wisconsin’s Whistling Straits in September. Captain Steve Stricker will then make his six captain’s picks for the event on the shore of Lake Michigan north of Milwaukee.

Sticker will have several difficult decisions to make with his captain’s picks. Former U.S. Open champion Webb Simpson is currently No. 13 in the standings and Phil Mickelson is 17th following his win at the PGA Championship. Both are Ryder Cup veterans.

Stricker also has a slew of younger players to consider. Scottie Scheffler has yet to claim his maiden PGA Tour victory but has regularly been in contention in big events and is 14th in the standings. Jason Kokrak (No. 16) is a two-time winner on tour this season and Sam Burns (No. 18) won his first tour event earlier this year.

English would appear to be close to locking up a spot with his three-event stretch that began with a T14 at the Palmetto Championship, where he was in contention on Sunday before fading with a 74.

Hickock vaulted 194 spots to 137th in the world rankings with his second place on Sunday. Australia’s Marc Leishman claimed third place to move up nine spots to No. 34.

Norway’s Viktor Hovland remained No. 14 despite his victory at the BMW International Open on the European Tour.

The only movement within the top 10 was Koepka sliding past Cantlay for No. 7 following his T5 at the Travelers.