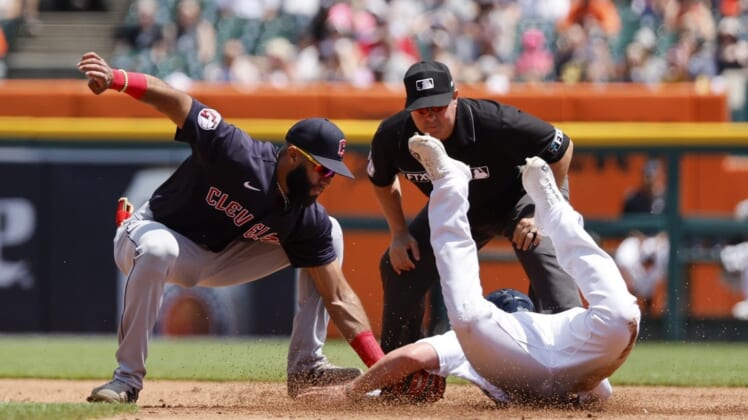 The Tigers took two of three games in the weekend series. Their game on Friday was postponed until July 4.

That forced Detroit manager A.J. Hinch to improvise. Wily Peralta pitched an inning of relief and Alex Lange (2-1) got four outs and was credited with the victory. Andrew Chafin tossed two-thirds of an inning and Michael Fulmer pitched the eighth. Gregory Soto finished up for his eighth save.

Robbie Grossman, the Tigers’ leadoff batter, left the game after one at-bat for undisclosed reasons.

Cleveland starter Triston McKenzie (3-4) pitched 7 2/3 innings, allowing two runs on four hits. He walked one and struck out eight. Andres Gimenez scored the only Guardians run and Owen Miller was the only player on either team with more than one hit. Cleveland has lost four of its last five games.

Castro, who had three hits on Saturday, opened the scoring in the fourth with his opposite-field blast that barely cleared the left-center field wall for his fourth homer.

The Guardians threatened against Peralta in the next inning. Richie Palacios and Luke Maile hit back-to-back singles, but Steven Kwan hit into a force play and Myles Straw grounded out.

Candelario made it 2-0 with his one-out blast in the sixth that cleared the right field wall. Candelario, who was not in the starting lineup, crushed a hanging curveball.

The Guardians broke through in the seventh. Gimenez hit a single off Chafin and moved up on an Miller single. Maile knocked in Gimenez with a sacrifice fly.

Tigers right fielder Daz Cameron robbed Amed Rosario of an extra-base hit with a diving grab in the eighth inning.

Miller had a two-out single in the ninth. Maile then flied out to end the game.