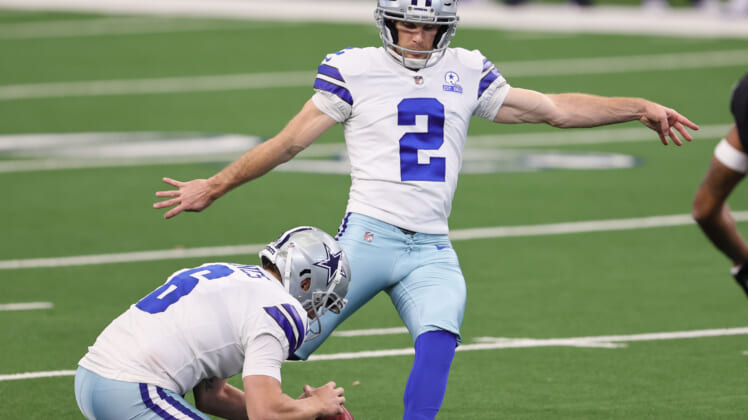 Veteran kicker Greg Zuerlein was one of the primary reasons the Dallas Cowboys lost their season opener against the Tampa Bay Buccaneers in Week 1.

The former All-Pro missed two field goals and an extra point in a 31-29 loss to the defending champs. A bit more consistency from Zuerlein, and the Cowboys would have pulled off a huge win.

Months removed from off-season back surgery Greg Zuerlein was put on the spot by Cowboys head coach Mike McCarthy Sunday against the Los Angeles Chargers.

With the game tied at 17 with four seconds left in the fourth quarter, Zuerlein trotted out to attempt a 56-yard field goal. There’s no way he’d hit it, right? Absolutely no way.

Wrong! The 33-year-old Missouri Western State product (that’s a thing) hit the game-winner as time expired with about 10 yards to spare.

Talk about an absolutely clutch kick from Greg the Leg. There’s no other way to go about it. And in reality, it could have saved the Cowboys’ season.

Only 30 teams since 1990 have earned a spot in the NFL Playoffs after starting 0-2. Even with the Cowboys existing in a mediocre NFC East, this would not have been an ideal scenario. Greg Zuerlein made sure that didn’t happen.