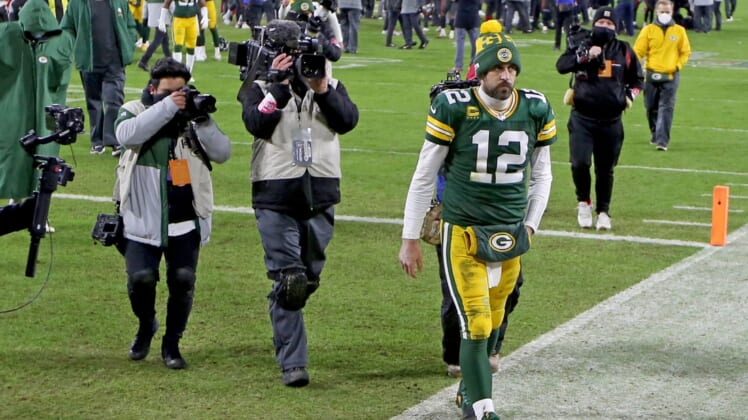 A week away from mandatory minicamp, the Green Bay Packers have no clue if star quarterback Aaron Rodgers will be in attendance or not. The team’s head coach, Matt LaFleur, admitted as much on Wednesday to Packersnews.com.

“It’s important that we have all our guys and certainly we’d love him to be here and hopefully we’ll see him Tuesday,” LaFleur said.

Rodgers has skipped voluntary workouts with the Packers — atypical from his usual behavior — after the world became aware of his desire to leave Green Bay on Draft Day.

The Packers have continued to insist they have no plans to cut or trade Rodgers, and Rodgers risks fines of $93,000 if he bails on mandatory workouts.

Just last week, the reigning NFL MVP told ESPN’s “SportsCenter” that his issue with the organization is more about philosophy and less about the team drafting his presumed replacement, Jordan Love, a year ago.

“It’s just kind of about a philosophy and maybe forgetting that it is about the people that make the thing go,” Rodgers said. “It’s about character, it’s about culture, it’s about doing things the right way.”

Last year Rodgers, 37, threw for 4,299 yards and a career-best 48 touchdowns with just five interceptions in leading the Packers to the best record in the NFC (13-3) and an NFC Championship Game appearance.