Goran Dragic has started to hit his stride at the right time as the NBA Playoffs are just around the corner. Here's what Dragic's production means to the Heat. 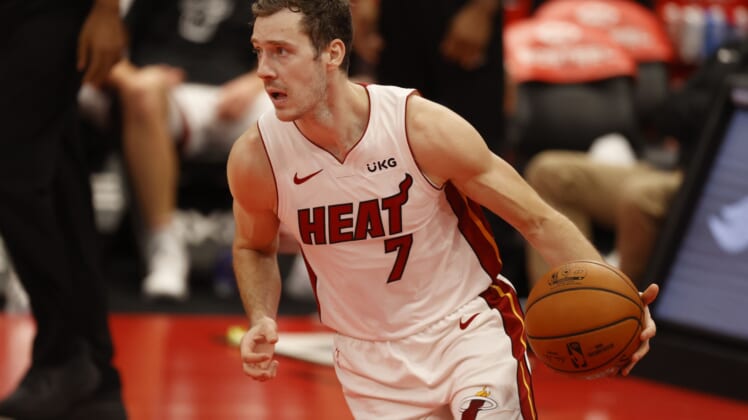 Goran Dragic has been an important piece to the Miami Heat for the seven years he’s been with the organization. Dragic has been through everything since the post-LeBron James era began.

The 35-year-old guard got his first crack at the NBA Finals in 2020 but unfortunately came down with a foot injury that took him out for a majority of the series. With a short offseason to recover, Dragic was hit hard after the beginning of the season.

Now, Dragic has started to round back to form as of late. He has been scoring efficiently, but even though he doesn’t fully look like his previous self, the Heat are going to need him down the stretch.

There was a time where Goran Dragic looked like he might have lost his step and looked unplayable. But, those days seem to be in the rearview mirror as Dragic has been looking more like himself lately.

Dragic has scored 18-plus points in four of the last six games and his assist numbers are also up after a stretch of games where he only accounted for two to four a game.

His play has been critical for Miami and combined with Tyler Herro’s return, it will take the load off his shoulders. Dragic even referred to this in a post-game press conference with Heat reporters a couple of days ago.

The number of games he missed during the middle of the season didn’t help his cause in the short term, but maybe that time off could do him more good than bad. A short offseason caused concern about his durability when it came to this year’s playoffs.

While Dragic doesn’t look fully back to his 2020 NBA Playoffs self, this might be as close as we get to it. There’s no reason why he can’t continue this moving forward. 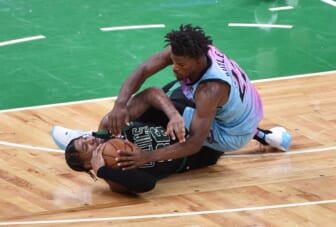 Also Read:
3 takeaways from the Miami Heat’s victory over the Boston Celtics

Goran Dragic must remain healthy down the stretch

Dragic had a rough middle of the season, much like many other members of the Heat organization. The 35-year-old guard has missed 21 games and Miami has a 9-12 record in those contests.

The Heat boast a 28-19 record when Dragic plays, which shouldn’t be surprising due to his play when he can string consistent stretches of games together. But, a more notable stat is the record split when Dragic and Jimmy Butler play together.

Miami has a 22-12 record when both Butler and Dragic play, which would place them tied for the No. 2 seed in the Eastern Conference with that winning percentage. Dragic is an important piece of this team and when healthy, there is a legitimate argument to make for the Heat as an East favorite.

It all comes down to Dragic’s health and if he is right, there is no reason Miami can’t make a strong run back to the NBA Finals, no matter how small that sample size is right now.

Dragic makes other players around him better, and even at the age of 35, there’s still more for him to accomplish in the next couple of months.

The Heat accomplished what no one thought was possible before the NBA went into the bubble last season. They made their way to the NBA Finals as the fifth seed and promptly rolled through the Eastern Conference.

Other teams have also been impacted by COVID-19 and injuries, but no other team in the Eastern Conference may have been hit harder than Miami. The organization has struggled to field a fully healthy roster all year and they are still missing guard Victor Oladipo, who may be done for the season.

It feels like the Heat are back to their healthy ways and hopefully, it can last throughout the rest of the season. They were struck with bad luck at the worst time last year when Goran Dragic and Bam Adebayo were injured in the Finals.

Now, the Heat know what they have moving forward if Oladipo doesn’t return. Even though they currently sit in the sixth seed, there’s no reason why they can’t jump to the fourth or fifth seed if the Atlanta Hawks or New York Knicks lose a game or two.

If you are a fan of the Heat, you know to trust Butler when the lights shine bright, and if they can get to the playoffs healthy, there might not be a team outside of the Brooklyn Nets that can stand in their way.

Dragic will be a big piece of this team when it comes time to put it all on the line. His production off the bench will be very important and if he can find even more confidence, the sky is the limit.