The Miami Heat are coming together at the right time as the regular season starts to close. Here's the road ahead for the Heat as they push for the fourth seed. 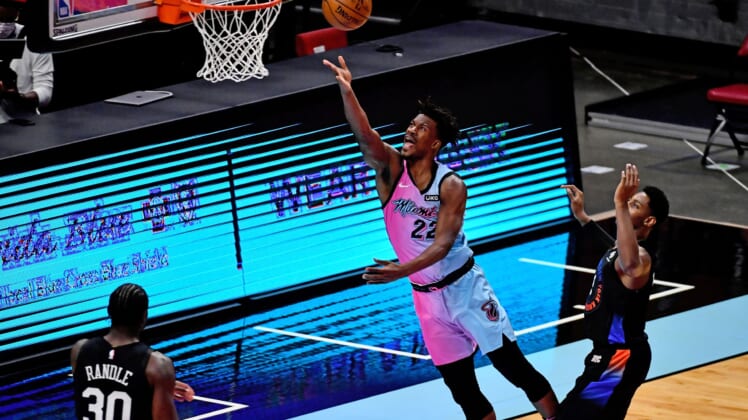 The Miami Heat have seven games left in the regular season before they either contend in the play-in tournament or prepare for their first-round playoff matchup. They have been a streaky team throughout the season, but they are finally putting it together when the most important basketball is in front of them.

Miami has won seven of its last nine en route to a record that’s five games above .500. The play of both Kendrick Nunn and Dewayne Dedmon has helped the Heat during their stretch, and reinforcements in the form of key players returning from injury could be on their way soon.

What are the Heat looking at when it comes down to the final two weeks of the regular season, and what do they need to accomplish?

Here are the schedules for the four main teams contending to stay out of the East’s play-in tournament:

A quick glance at the schedules is all you need to take at least two things away. The Knicks have a very difficult slate, while the Celtics have an easier path. New York currently sits in fourth and most likely will not remain there by the end of the season. All seven opponents they face are possible playoff squads.

The Hawks’ next four games are tough, with teams that have been hot as of late. But, their last two come against foes already eliminated from the playoffs. Miami also have two games against teams that are eliminated, but they also have more difficult matchups with Boston, Philadelphia, and Milwaukee remaining.

The Celtics are in a great position, with fixtures against three teams that are eliminated, and one game against a team currently on the outside looking in on the playoff picture. However, they do face Miami twice and New York on the last day of the regular season.

With all that established, it’s clear the Heat have their work cut out for them, but on Tuesday night, they’ll try to extend their three-game winning streak against the Dallas Mavericks. If you want to be on the lookout for other games on Tuesday night and beyond, check out our daily updated “NBA games today” article.

Miami Heat’s outlook down the stretch

Miami owns the tiebreaker over the Knicks, but they need a little help to catch New York, and are already down tiebreakers to both the Hawks and Celtics.

However, the Heat and C’s aren’t done playing each other this season. The two teams face off on May 9 and May 11. These two clashes could have a great influence on which team falls to the seventh seed. Atlanta seems to be in a good spot if it can win at least three of its next four games.

As is the case with the Hawks, there is still a realistic possibility of New York falling to the seventh seed. The Knicks are only three games ahead of the Celtics, but the difficulty of their schedule could send them into a downward spiral if things start to head in the wrong direction.

Such a downfall shouldn’t be something Miami counts on, because coach Tom Thibodeau’s bunch has been clicking as of late. The Knicks have won 12 of 13, but at some point, you have to think the heavy workload Thibodeau demands from his best players catches up to Julius Randle, and especially, R.J. Barrett.

At the end of the day, the Heat need to win at least one of the two showdowns against Boston. Losing twice would be extremely difficult to overcome, but if Miami can pull out W’s and sweep the C’s, they would essentially gain two and a half games thanks to the aforementioned tiebreaker.

The end goal for the Miami Heat should be to leap to the fourth seed by the end of the regular season. However, looking at the schedule makes it quite difficult if the Knicks and Hawks take care of business. A secondary goal should be grabbing the fifth seed, which ironically is the same spot they made their NBA Finals run from last season.

It is important for Miami to push hard the next seven games, because clinching home-court advantage for the first round would be a nice consolation prize after the multitude of issues this season. The Heat’s schedule may look difficult, but according to Jimmy Butler, he doesn’t see it as tough.

There are many different ways the next seven games can go. The Miami Heat could continue to torch teams on their schedule or they could go on another losing streak and fall to rock bottom as the 10th seed. But, based on their recent play, you could probably expect either the first option or in-between the two.

While we talk about where the Heat could be seeded, as long as they stay out of the play-in tournament, everything should be okay. Miami could use a week off for injury management and rest.

Plus, Butler doesn’t care where the Miami Heat are when it comes playoff time. The organization will take on the challenge from any seed and they proved it in the 2020 season with difficult circumstances. If the Heat can get Butler back into playoffs, which will happen, he will take care of the rest as he said.