The Golden State Warriors were able to erase a double-digit fourth quarter deficit against the Memphis Grizzlies in Game 4 of their playoff series Monday night.

With Memphis looking to tie the Western Conference Semifinals series at two inside San Francisco’s Chase Center, the team came out and played exceptional defense. It was clear from the get that head coach Taylor Jenkins had Memphis ready to go without star guard Ja Morant (knee) in the mix.

Unfortunately, it just was not enough for the Grizzlies to even the series. Despite holding a 12-point fourth quarter lead, Memphis couldn’t compete with Golden State’s veteran experience.

Dillon Brooks struggled with shot selection. Stephen Curry took over in the final stanza. The end result was a 101-98 win for the home team and a 3-1 series lead. Below, we give you four winners and losers from the Golden State Warriors three-point Game 4 victory in San Francisco.

At one point Monday night, Curry was 1-of-10 from three-point range with three turnovers as the Warriors struggled big time getting anything going. The team scored 38 first-half points and looked to be in trouble in the fourth quarter.

That’s when Curry stepped up big time. The three-time champion scored a resounding 18 points in the final stanza as Golden State overcome a doublle-digit deficit against the Morant-less Memphis Grizzlies.

Those are not typical Curry-like numbers. As we saw with Milwaukee Bucks star Giannis Antetokounmpo earlier in the evening, he was not efficient. Even then, the Warriors needed their star to step up when it counted the most. He did that en route to leading Golden State to a 3-1 series lead. 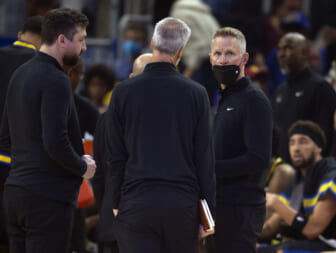 Brooks was suspended for Game 3 after a hard foul on Gary Payton II led to the Warriors guard suffering a season-ending elbow injury the previous game. Once Brooks returned to the court inside Chase Center, he was met with widespread boos from Warriors fans. As expected.

If you ask those who follow the Memphis Grizzlies, it wasn’t unexpected to see Brooks take some absolutely atrocious shots throughout the game. That included missing on multiple three-point attempts in the final stanza when everything looked forced on Brooks’ end. In fact, that could be said throughout the game.

That’s just atrocious stuff right there. Brooks ended up shooting 5-of-19 from the field with 12 points and four turnovers. He missed on 7-of-9 from distance and finished minus-5 in 39 minutes. Regardless of his deensive ability, Brooks has to provide more on the other end of the court. Period.

Grizzlies head coach Taylor Jenkins talked about Morant’s absence ahead of Game 4, indicating that he’s not expecting anyone to fill in for the star guard. The idea was for those who are playing to do a little bit better.

“I always say it’s not about doing more, it’s just doing better. It’s just executing our system better on the offensive end, the way we play with pace and share the ball. Guys elevated their games during those stretches and then defensively, obviously, we did not play to our standard the last game.”

While the likes of Brooks and others struggled to do anything, Jones stepped into a starting role and played extremely well. The former first-round pick from Duke scored 19 points on 8-of-18 shooting while adding six rebounds and five assists.

More than these basic stats, Jones continued to put pressure on the Warriors’ defense. It got to the point where acting head coahch Mike Brown had to put Andrew Wiggins on the point guard. If Morant is forced to miss Game 5 on Wednesday, the Grizzlies won’t have to worry too much about what Jones will bring to the table from an individual perspective.

Klay Thompson looked out of sorts for the Golden State Warriors

We’ve seen some absolute stinkers from Thompson thus far in this series. That includes the veteran shooting a combined 11-of-38 from the field in Game 2 and Game 3 against Memphis. Making his first postseason appearance since back in 2019 (missed previous two seasons to injury), Thompson simply looks like a shell of his former self.

That was no more apparent than in Game 4 when the Golden State Warriors needed him to step up. Thompson seemingly rushed multiple wide-open three-pointers — missing on all seven of his attempts. He was a mere 6-of-20 from the field with three turnovers. The Grizzlies’ aggressive defense got to him throughout the game.

It’s something Thompson must work through if the Warriors expect to win the NBA title this season. They need him to play at 80% of his pre-injury self. Right now, the three-time NBA champion simply isn’t doing that. And in reality, it almost cost the Warriors Game 4.