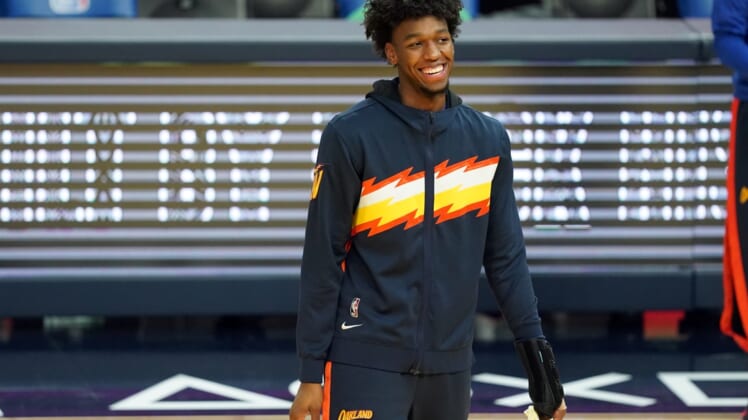 Rookie James Wiseman has returned to practice and could join the Golden State Warriors on their upcoming road trip.

Wiseman sprained his left wrist on Jan. 30 against the Detroit Pistons and has been sidelined with limited physical activity permitted.

The Warriors announced Thursday that Wiseman was re-evaluated and the exam “indicated James is making good progress. He has returned to segments of practice and the hope is that he can possibly return to play at some point during the team’s upcoming road trip.”

The Warriors play their next four games on the road, beginning Friday night in Orlando.

Wiseman, the No. 2 pick in the 2020 NBA Draft, was removed from the starting lineup in January. The move was by design, head coach Steve Kerr said, allowing Wiseman to play minutes as the first big man off the bench while competing to be in the primary late-game rotation.

But Wiseman might return as a starter out of necessity.

The Warriors are 16-13 and in playoff contention, largely without a consistent big man available. Kerr started four guards in Wednesday’s win over the Miami Heat.

Wiseman missed the past nine games, Draymond Green sat out the Heat game with a sprained ankle and Kevon Looney hasn’t played since Feb. 2 with his own ankle injury.

Wiseman is averaging 12.2 points and 6.1 rebounds per game.