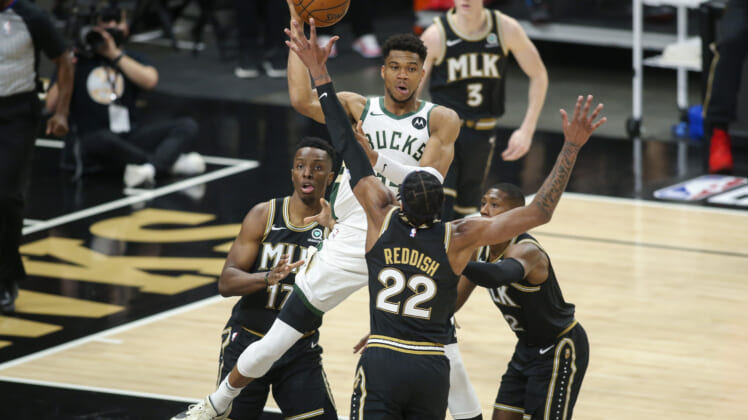 Giannis Antetokounmpo injury update: The Milwaukee Bucks star has suffered a hyperextended left knee and will not return. This could very well cost him the remainder of the Eastern Conference Finals.

In the third quarter of his team’s Game 5 outing against the Atlanta Hawks in the Eastern Conference Finals, the Greek Freak went down in a heap of pain after an alley-oop attempt. Even fans inside State Farm Arena in Atlanta were in silence as Giannis grabbed for his left knee.

It was an ugly scene.

Giannis Antetokounmpo was down for several minutes on the court before making his way to the locker room with the help of teammates. The limp on his left leg was pretty darn evident at the time.

This obviously isn’t something anyone wanted to see. That’s especially true after Trae Young was ruled out for Game 5 with a leg injury of his own ahead of the all-important matchup.

As noted above, the playoffs have been defined by injury after injury to star players. That includes Los Angeles Clippers star Kawhi Leonard missing the first five games of the Western Conference Finals against the Phoenix Suns.

The hope here is that this Giannis Antetokounmpo injury isn’t as bad as it looked live.