Frank Gore took thousands of hits across 16 seasons in the NFL, using his body to bulldoze his way through defenders and taking countless jabs in the process. Now, the 38-year-old seems ready to put football behind him for a shot at a new sport with even more physicality.

According to NFL Network’s Ian Rapoport, multiple NFL teams have called Gore this offseason to inquire about his interest in playing.

But the future Hall of Famer is declining opportunities, instead focused on becoming a boxer and finding a fight.

“I’ve been training for both — football and boxing. I’ve always loved boxing, so that’s what I’ve been doing. And we’re trying to make a fight happen. If we do that, you’ll see me in the ring.”

Gore spent the 2020 season with the New York Jets, racking up 187 carries and turning them into 653 rushing yards. While he hasn’t been as efficient carrying the football in recent years, averaging just 3.5 yards per carry, NFL teams thin at running back wanted him for his experience and leadership.

It’s not unusual for an NFL player to pursue a career in boxing. Ed “Too Tall” Jones, Alonzo Highsmith, Ray Edwards and Mark Gastineau are among a handful of players who put away their helmets and strapped on gloves.

Gore has always kept himself in shape, sharing that sparring is one of the ways he remained in peak form and enjoyed a lengthy career at a position with a short shelf life. It helped spark his love for boxing and has opened the door for him to spend the past five weeks preparing for a potential bout in the ring. 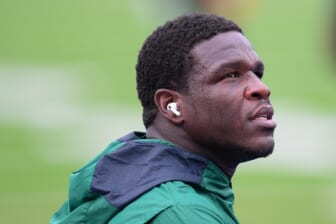 A return to the NFL isn’t out of the question. He likely won’t move past Walter Payton (16,726) for the second-most rushing yards in NFL history, but he is just three touchdowns shy of passing Jim Taylor on the all-time rushing touchdown list.

But for now, Gore is declining offers from NFL teams to pursue his dream of getting in the ring and throwing punches.