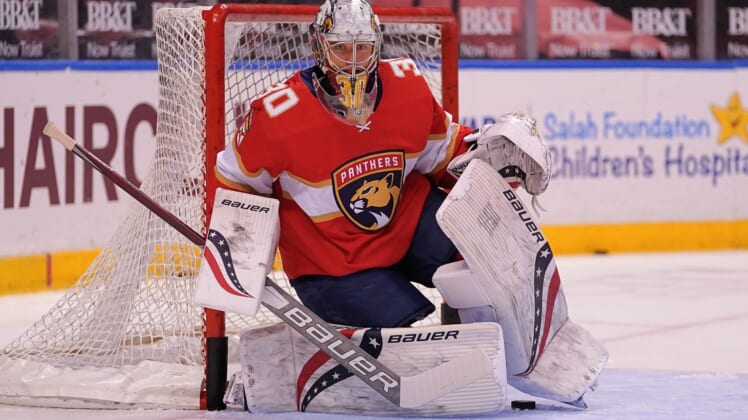 Goalie Spencer Knight will make his NHL debut for the Panthers on Tuesday as Florida looks for back-to-back wins over the Columbus Blue Jackets in Sunrise, Fla.

The Panthers topped the Blue Jackets 4-2 on Monday for their third win in four games. Columbus lost its sixth consecutive game and fell to 2-11-2 in the past 15 games.

Florida made Knight the 13th overall pick of the 2018 draft and signed him to an entry level contract late last month after his sophomore season at Boston College ended.

Panthers coach Joel Quenneville had Knight back up Sergei Bobrovsky on Monday night before announcing the rookie would play Tuesday. Bobrovsky made 34 saves in the win.

Knight, a former USA youth national team player who celebrated his 20th birthday Monday, has been with the Panthers either in South Florida or on the road since signing with them.

“He has handled some big situations and he has handled them like, ‘Hey, it’s the next challenge in life,’ ” Quenneville said. “He has done everything he can to prepare for this opportunity. As an organization, we’re looking forward to it as well. …

“(Tuesday) will be fun. Get that first one, first taste of his career.”

The Tuesday night contest will wrap up the teams’ eight-game season series, with the Panthers now 6-0-1 against the Blue Jackets.

The Panthers have won their past two games and are 3-0-1 in their past four. Columbus comes into Tuesday with losses in six consecutive games and 13 of its past 15.

Florida’s Monday victory, coupled with Carolina’s 3-2 overtime loss to the Tampa Bay Lightning, allowed the Panthers to tie the Hurricanes for the top spot in the Central Division.

The Hurricanes, who have two games in hand over the Panthers, visit Florida for a two-game series starting Thursday.

The Blue Jackets, who are tied for last in the Central, will have eight games remaining once they are done in South Florida. They are looking toward a new future.

Defenseman Seth Jones, one of the few players from the team’s postseason runs of the past four years who not only remains with the Blue Jackets but is healthy and playing, said it is no fun “having nothing to play for.”

He added that it doesn’t mean the team can stop doing its job.

“We are professionals and we have a job to do every time we come to the rink,” Jones said. “Whether it is practice or games, we have to give a 100 percent effort, and that’s what we’re building here. We want to build this back to where we were. And that starts with work ethic.”

Columbus coach John Tortorella made a number of changes to his slumping team’s lineup before the Monday game, the biggest being the decision to scratch center Max Domi.

Domi had a rough game Saturday in Dallas, playing just 10:14 and finishing with a minus-4 rating. Domi was penalized for a high-sticking and slashing while also receiving a 10-minute misconduct late in the second period.

It was the second time in three games that Domi was unavailable for a big chunk of a game due to a penalty.

It’s possible Domi — who was one of Columbus’ biggest offseason acquisitions as he came from the Montreal Canadiens in the Josh Anderson trade — could return Tuesday night.