FC Dallas scored three goals in a four-minute first-half span, got braces from Jesus Ferreira and Ricardo Pepi and held on for 5-3 win over host Austin FC on Sunday in the most recent rendition of the Texas Derby.

FC Dallas (6-9-7, 25 points) emphatically snapped a three-match winless streak, dating back to a 2-0 home victory against Austin FC on Aug. 7.

Austin (5-12-4, 19 points) has lost four of its past five matches and fell to FC Dallas for the second time in the month of August. The expansion team has just 20 goals this season in its 21 matches, the least in the league.

Dallas jumped to the lead in the fifth minute on a rare error by Austin FC goalkeeper Brad Stuver. Stuver was lackadaisical in clearing a pass that was sent back to him by defender Julio Cascante, giving Pepi a chance to steal it away and feed Ferreira for an easy conversion for the goal. 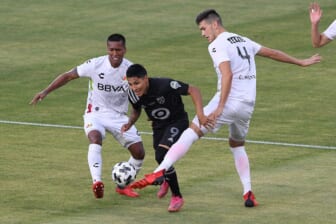 Austin answered in the 13th minute when Cascante directed home a dead-on crossing pass from outside the bow from Zan Kolmanic. Cascante, set at the far post, headed the ball down into the opposite side of the net, never allowing Dallas keeper Phelipe Megiolaro a chance to make a save.

Dallas then put its stamp on the match by scoring three goals in a span of four minutes. First, Pepi was wide open on the left side of the box and made short work of a crossing pass from Szabolcs Schon to give Dallas a 2-1 lead in the 36th minute.

Just two minutes hence, Ferreira ripped a shot past Stuver and into the net after Schon’s blistering attempt bounced off Austin defender Matt Besler and right onto Ferrera’s right foot.

Then, in the 40th minute, Schon’s long pass found Pepi open on the right side, and the 19-year-old easily beat Stuver low to the right corner in a one-on-one opportunity. The goal was Pepi’s 11th of the season, tops in MLS among U.S.-born players.

Jader Obrian added to the Dallas advantage with a goal in the 53rd minute off a long goal kick by Megiolaro.

Diego Fagundez and Alex Ring scored for Austin in the 59th and 68th minute, respectively, to give the home crowd a slither of hope, but FCD was more than up to the task in securing the victory.